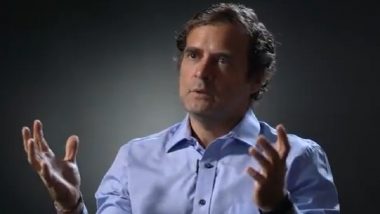 "JEE-NEET aspirants wanted the PM do 'Pariksha Pe Charcha' but the PM did 'Khilone Pe Charcha' (NEET and JEE aspirants wanted PM to hold a discussion on exams. Instead, PM was discussing toys)," the Wayanad MP tweeted with #Mann_Ki_Nahi_Students_Ki_Baat. He has been targeting the government over its decision to hold the NEET and JEE exams amid the coronavirus pandemic. NEET, JEE 2020: Subramanian Swamy Tweets 'Conducting Exams Will Be Giant Mistake Like Nasbandi of Indira Gandhi'.

JEE-NEET aspirants wanted the PM do ‘Pariksha Pe Charcha’ but the PM did ‘Khilone Pe Charcha’.#Mann_Ki_Nahi_Students_Ki_Baat

In his monthly 'Mann Ki Baat' radio address earlier today, PM Modi spoke at length on toys. PM Modi said India has the talent and ability to become a toy hub for the entire world and called upon startups to work towards realising this potential while being "vocal about local toys". The Prime Minister called upon start-up entrepreneurs to "team up for toys". He did not touch the NEET and JEE exams in his address.

(The above story first appeared on LatestLY on Aug 30, 2020 12:27 PM IST. For more news and updates on politics, world, sports, entertainment and lifestyle, log on to our website latestly.com).