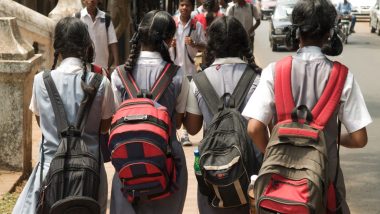 New Delhi, June 28: The vacation bench of Supreme Court, which was convened on Sunday to hear an urgent plea seeking cancellation of the pending Class 10 examinations in Rajasthan, refused to rule in the petitioner's favour. The apex court allowed the Rajasthan Board of State Education (RBSE) to conduct the pending exams on June 29 and 30.

The petition was moved by advocates Rishi Kapoor and Ashish Pandey on behalf of Maghi Devi, a resident of Bikaner who expressed concern over the health safety of her child who would be compelled to appear for the examinations on Monday and Tuesday. ICSE, CBSE 2020 Results Date: Class 10, 12 Exam Results to be Declared by July 15, Boards Tell Supreme Court.

The plea claimed that most of the examination centres were used as transit camps by the Rajasthan government in wake of the migrant crisis that had erupted following the imposition of lockdown in mid-March.

Around 11 lakh students, who would appear for the examinations across 120 schools on June 29-30, face the risk of contracting the virus, the petitioner argued.

The SC bench, however, upheld the Rajasthan High Court's decision which had given the approval for holding exams provided that the safety norms as enlisted by the Health Ministry are strictly adhered to.

RBSE Exams to Be Held as Scheduled, Class X Students Can Appear

Bottom line: Students of class X to appear for the remaining papers under RBSE on June 29 and June 30.

The Supreme Court said that the Rajasthan HC order under challenge was passed a month back and since then there has been no COVID-19 positive cases located in the examination centres.

The order came few days after the ICSE and CBSE - the two foremost central education boards - announced the cancellation of pending Class 10 and Class 12 examinations. The exams were earlier scheduled between July 1-15, but were cancelled as the COVId-19 threat is yet to subside.

(The above story first appeared on LatestLY on Jun 28, 2020 07:15 PM IST. For more news and updates on politics, world, sports, entertainment and lifestyle, log on to our website latestly.com).