UPSC Exam: Centre Not to Give Extra Chance To Aspirants Who Missed Civil Services Exam 2020 Due to COVID-19 Pandemic

The Central government on Friday said that it would not give an extra chance to aspirants UPSC Civil Services, for those who lost their last chance in 2020 due to COVID-19 pandemic. The Centre made the submission before the Supreme Court regarding this. 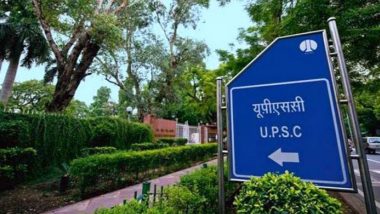 New Delhi, January 22: The Central government on Friday said that it would not give an extra chance to UPSC Civil Services aspirants, who lost their last chance in 2020 due to COVID-19 pandemic. The Centre made the submission before the Supreme Court regarding this. The next hearing before the matter is on January 25, 2021. UPSC Exam Calendar 2021 Released Online at upsc.gov.in, Civil Services Prelims To be Held in June, Check Other Examination Dates.

A Bench headed by Justice AM Khanwilkar was hearing the plea seeking an extra attempt in the UPSC exams for those candidates who missed their last attempt in the preliminary exam held in October 2020 due to COVID-19 pandemic. The bench directed the Additional-Solicitor General SV Raju to file an Affidavit on January 25. UPSC Civil Exam Age Limit for Students of General Category Reduced to 26 Years? PIB Debunks Fake News, Reveals Truth Behind Viral Post.

“Yesterday night, I received information from the government that they are not agreeable. I would want to put this on Affidavit in a week," reported The Live Law quoting the ASG as saying. In September last year, the plea was filed in the Supreme Court, seeking postponement of the Civil Services Examination 2020, slated on October 4, against the backdrop of the Covid-19 pandemic and heavy rain and floods in several parts of the country.

The top court had directed the Centre and the UPSC to consider granting an extra chance to candidates who had their last attempt in October. The exam was held on October 4. Notably, earlier this month, SV Raju had informed the bench that the government and UPSC were considering to give one more chance to such candidates.

(The above story first appeared on LatestLY on Jan 22, 2021 01:07 PM IST. For more news and updates on politics, world, sports, entertainment and lifestyle, log on to our website latestly.com).