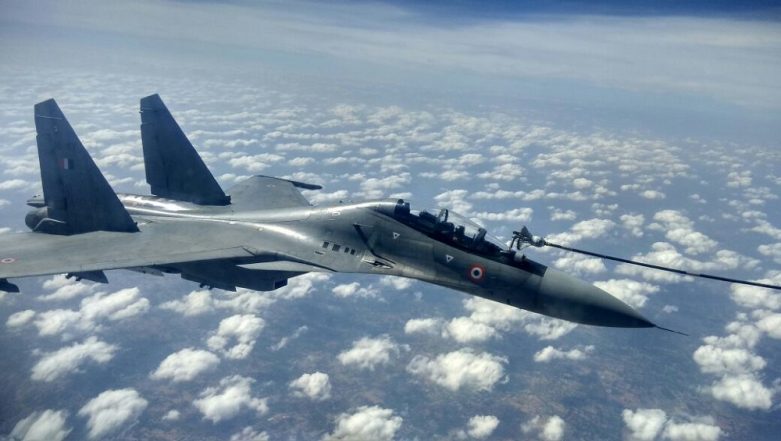 New Delhi, April 25: A total of 11,000 sorties were conducted by the Indian Air Force (IAF) during its biggest war-like exercise ‘Gagan-Shakti’. The two-week long exercise concluded on 22nd April. These number sorties are generally done in a month’s time. Out of these 11,000 sorties, 9,000 done by the fighter aircraft alone were conducted in the pan-India exercise. According to a report published in The Times of India, an IAF official on Tuesday said, “Of the 11,000 sorties during the pan-India exercise from April 8-22, around 9,000 were of fighters like Sukhoi-30MKIs, Mirage-2000s, Jaguars, MiG-29s, MiG-21s, MiG-27s, Tejas and the Hawk advanced jet trainers (in a combat support role).” Around 1,400 officers and 14,000 men participated in this mega exercise.

The exercise was conducted in two phases. In the first Phase the IAF tested its capability to suppress enemy attack along the western front with Pakistan, and in the second phase, IAF showcased its strength along the northern border with China from Ladakh to Arunachal Pradesh. The main Aim of the exercise was to test the real-time coordination, deployment and employment of Air Power in a short and intense battle scenario. The IAF exercised the entire machinery to validate its concept of operations and war-waging capability.

During the exercise, Network Centric Operations were conducted with the focus to enhance situational awareness and to enable real-time data transfer between the weapon systems, satellite and ground-based systems. Indigenous-built Light Combat Air Craft (LCA) Tejas was put to the test. It carried out defence and Combat operations. Forward Surgical Centres (FSC) were set up at remote forward locations. FSC enhances medical capabilities and enables immediate life and limb-saving surgeries and stabilisation of patients away from service hospital. Paratroopers of all the three wings of Defence forces were airdropped to targeted areas.

The highlight of the exercise was the mid-air fueling, in which IL-78 demonstrated the importance of refuelling aircraft during any long-range missions, as it would ensure long-range strike capabilities for the Su-30 MKI. The IAF also undertook a Battalion level airborne assault in the desert sector. It included a paradrop of 560 paratroopers of the IAF and the Indian Army, combat vehicles and GPS guided cargo platforms. The IAF effectively exercised its Maritime warfighting concepts on both Western & Eastern seaboards. The primary focus in Phase–II was to address targets over Eastern Sea Board right up to Malacca Straits. Sukhoi -30MKI fighter jets equipped with BrahMoa missiles hit targets with precision in the Malacca Strait, the entry point where Chinese naval ships into the Indian Ocean Region. A large number of Advanced Landing Grounds Operationalised for conducting Special Airborne Operations close to the simulated objective areas were undertaken.

The operation commandos of the IAF also executed Inter-Valley Troop Transfer (IVTT) along with the Indian Army. The IVTT was conducted in the high hills of North and North East along the Indo-Sino border. The aim was to validate the capability of the IAF and the Army to quickly transfer and redeploy acclimatised troops. The Indian Air Force also test readiness to deal with a biological, chemical and nuclear war and we were satisfied with our capability to deal with such situations during the exercise.