A terrorist fired upon troops of 29 Battalion of CRPF and Jammu &Kashmir Police deployed at Srinagar's Pantha Chowk, at 1.15 pm. Further information is awaited. 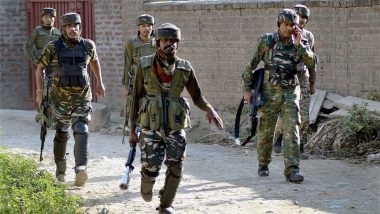 Jammu & Kashmir, June 16: According to media reports, CRPF troops were attacked and shot at in Jammu and Kashmir, a short while ago. One jawan is reported to have sustained injuries. A terrorist fired upon troops of 29 Battalion of CRPF and Jammu & Kashmir Police deployed at Srinagar's Pantha Chowk, at 1.15 pm. Further information is awaited.

Earlier in the day, clashes broke out between the security forces and stone pelting youths immediately after the Eid prayers on Saturday in Jammu and Kashmir, police said.

In Anantnag, a clash was reported in the town's Janglat Mandi area. The police used tear gas shells and pellet guns to disperse the crowd. Three protesters were injured, according to doctors in an Anantnag hospital.

In Pulwama, a crowd protested against the killing of a nine-year-old boy on Friday in an Army firing, the police said.  The youth in Shopian town also resorted to stone pelting.

Speculation is already rife whether the ceasefire will continue after Eid. The abduction and killing of jawan Aurangzeb Khan and the killing of Rising Kashmir editor Shujaat Bukhari has ignited the debate about ceasefire that was introduced by the government of India after Jammu and Kashmir Chief Minister Mehbooba Mufti requested so. There have been multiple violations of the ceasefire by militants in the past month with the shooting on the CRPF battalion 29 being the latest. (With Agency Inputs)

(The above story first appeared on LatestLY on Jun 16, 2018 04:04 PM IST. For more news and updates on politics, world, sports, entertainment and lifestyle, log on to our website latestly.com).