Republic Day Parade 2022: As Row Breaks Out Over Centre’s Rejection of Kerala Tableaux, Know How January 26 Tableaux Are Selected

Last year also tableaux from West Bengal, Maharashtra, Kerala and Bihar were rejected, leading to an uproar from the states 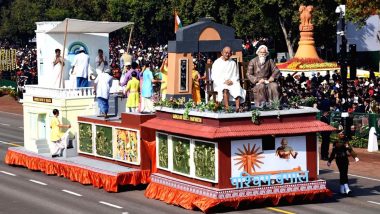 The political row over the selection of tableaux for Republic Day celebrations escalated after West Bengal Chief Minister Mamata Banerjee Wrote to PM Narendra Modi expressing shock as West Bengal’s tableau for the Republic Day parade was rejected without any valid reasons or justifications. She mentioned in her letter that the tableau was set to commemorate the contributions of Netaji Subhas Chandra Bose and his INA on his 125th birth anniversary year.   Republic Day 2022: 1,000 Drones To Display Multiple Formations in Sky at Beating Retreat Ceremony

"The rejection of Tamil Nadu's tableau, that included freedom fighters VOC, Mahakavi Bharathiyar, Rani Velu Nachiyar, and Maruthu Brothers, from the Republic Day Parade is disappointing. I ask that the respected Prime Minister intervene immediately and ensure that Tamil Nadu's contribution to the freedom struggle is given a place [in the parade]," Stalin said. Officials of the Defence Ministry, which is responsible for the parade and is the coordinating body for the tableaux, say that the tableaux proposals are selected by a Subject Expert Committee.

Last year also tableaux from West Bengal, Maharashtra, Kerala and Bihar were rejected, leading to an uproar from the states.

While the government is yet to announce publicly the final selected tableaux for the parade, reports indicate there will be 21 tableaux in the parade, with 12 from states and Union Territories and nine departments under the Central Government or independent institutions have made the cut.

How Republic Day Tableaux Are Selected

The defence ministry which is responsible for the republic day parade and celebrations forms a committee of distinguished persons from various fields to shortlist the best tableau from the received proposals. The proposals have to be submitted by September 27, and the shortlisting of the proposals start in the second week of October.

This expert committee including prominent people in the fields of art, culture, painting, sculpture, music, architecture, choreography among others holds six to seven rounds of meetings to evaluate the proposals to carry out the shortlisting and the final selection.

It is also important to note that the tableaux of two different states/ UTs cannot be too similar, as the tableaux, together, should showcase the diversity of the country.

The defence ministry has shared basic guidelines about what all the tableaux can or should include. In its first phase of selection, the sketch or design of the proposals is examined and suggestions for modifications, if any, are carried out. Once approved by the committee, the participants have to present three-dimensional models of their proposals. The models are then examined again by the expert panel for final selection.   Republic Day 2022: 75 Aircraft Including 5 Rafale to Feature in 'Grandest Flypast Ever' During R-Day Celebrations

The final selection of a tableau is based on a combination of factors, including visual appeal, impact on the masses, idea behind it, degree of detailing that went behind it and also the music accompanying it.

It is to be noted that the official representative of an organisation will interact with the members of the committee. Artists or designers of the tableau do not interact directly with the panel members unless directed otherwise. Only one tableau participates from an organisation in the parade. The defence ministry also said it is natural for more proposals to be rejected than those approved given the paucity of time. The best three tableaux are given trophies by the ministry.

(The above story first appeared on LatestLY on Jan 18, 2022 04:09 PM IST. For more news and updates on politics, world, sports, entertainment and lifestyle, log on to our website latestly.com).