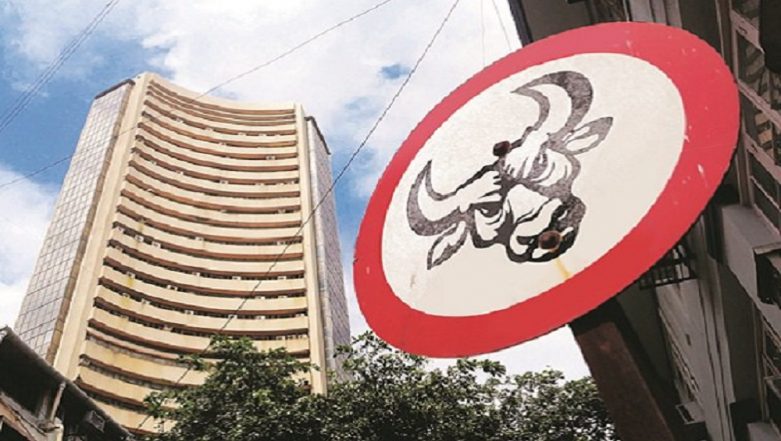 Mumbai, January 8: The benchmark BSE Sensex opened lower on Tuesday as investors booked profits in recent gainers amid mixed Asian cues and a rebound in crude oil. After two sessions of gains, investors cashed profits in banking, auto and power shares that dragged down key indices. The 30-share barometer dropped 58.53 points, or 0.16 per cent, to 35,791.63 in opening trade. The gauge had rallied 336.45 points in the previous two sessions.

Meanwhile, Brent crude, the international oil benchmark, was trading 0.47 per cent higher at USD 57.88 per barrel. Brokers said investors were also cautious and preferred to log gains ahead of Q3 earnings of bluechip companies such as TCS and Infosys later this week. Besides, a weak trend at most of other Asian markets weighed on sentiments here, they added. Central Statistics Office's positive advanced estimates of national income for 2018-19, however, capped the losses on bourses, traders said. Sensex Rises Over 200 Points, Nifty Above 10,300.

The domestic economy is expected to grow at 7.2 per cent in 2018-19 against 6.7 per cent in the previous fiscal mainly due to improvement in the performance of agriculture and manufacturing sectors, the CSO had said Monday. The laggards include PowerGrid, Axis bank, NTPC, Bajaj Auto, M&M, HDFC Bank, Kotak Bank, Hero MotoCorp, HDFC, Reliance Industries, HCL Tech and Maruti Suzuki, falling up to 1.01 per cent.

Globally, in the Asian region, Shanghai Composite Index fell 0.20 per cent, Korea's KOSPI shed 0.18 per cent, Taiwan Index down 0.16 per cent. However, Japan's Nikkei was up 0.80 per cent and Hong Kong's Hang Seng gained 0.29 per cent in their early deals. The US Dow Jones Industrial Average ended 0.42 per cent higher Monday on optimism over fresh talks on trade with China.