Who Is Sneha Dubey? Know All About India’s First Secretary at the United Nations Who Gave Strong Reply to Pakistan PM Imran Khan

Sneha Dubey passed the civil services examination in the very first attempt in the year 2011. She grew up in Goa and spent most part of her childhood there. Sneha did her Masters's in Geography from New Delhi’s Jawaharlal University after graduating from Fergusson College in Pune. 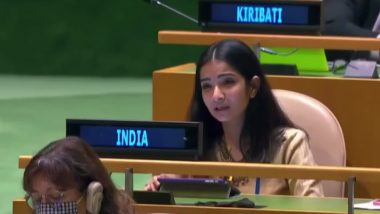 New Delhi, September 25:  Sneha Dubey, India’s First Secretary at the United Nations (UN) made headlines after she slammed Pakistan for supporting terrorism in India's right of reply at the United Nations General Assembly (UNGA). Soon after, people took to the internet and began searching for the woman officer. Sneha Dubey is a 2012 batch IFS officer. She grew up in Goa and spent most part of her childhood there. She did her Masters' in Geography from New Delhi’s Jawaharlal University (JNU) after graduating from Fergusson College in Pune.

Sneha is the first in her family to join the government services. According to the details available, Sneha was very passionate about joining the Indian Foreign Service. As she was interested in international issues, Dubey completed her MPhil studies at the School of International Studies in Delhi's JNU. Sneha, who is fond of traveling, believes that becoming IFS has given her the best opportunity to represent the country.

After being chosen for the International Service, Sneha Dubey’s first appointment was within the Ministry of Exterior Affairs. Then in August 2014, she was India's third secretary at Madrid before being posted to the United Nations in 2014. Sneha Dubey, India’s First Secretary at the UN, Slams Imran Khan at UNGA; Says Pakistan Nurtures Terrorists in Their Backyard (Watch Video).

We heard the leader of Pakistan trying to justify act of terror, such defence of terrorism is unacceptable: Sneha Dubey, First Secretary at UNGA @MEAIndia pic.twitter.com/yIsdZ3SEuM

The young Indian diplomat was quoted in an interview earlier, saying that the idea of joining the Indian Foreign Service had always inspired her, adding that her interest in global affairs nudged her to pursue the study of International Relations.

(The above story first appeared on LatestLY on Sep 25, 2021 10:07 AM IST. For more news and updates on politics, world, sports, entertainment and lifestyle, log on to our website latestly.com).