Former Uttar Pradesh Chief Minister Kalyan Singh was shifted to the Sanjay Gandhi Post graduate Institute of Medical Sciences (SGPGIMS), late on Sunday evening, after his condition took a turn for the worse. 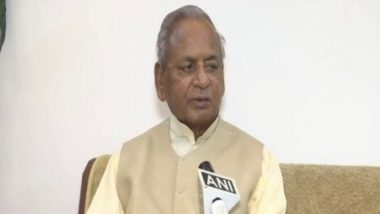 He was shifted from the Ram Manohar Lohia Institute of Medical Sciences (RMLIMS), where he was in ICU since Saturday.  Kalyan Singh Health Update: Former Uttar Pradesh CM Admitted to ICU of SGPGI in Lucknow

A sudden rise in his blood pressure triggered a minor heart attack.

According to an official statement, the 89-year-old politician, has developed an inflammation in the parotid gland and was also diagnosed with irregularities in his kidney function.

A panel of ten doctors are the former chief minister.

"His blood pressure and pulse are stable, but he has altered sensorium which is being treated by doctors of cardiology, nephrology, endocrinology and neuro-autology, according to a SGPGI bulletin. Antibiotics administration has helped control his sepsis, but brain scans showed blood clots.

(The above story first appeared on LatestLY on Jul 05, 2021 08:31 AM IST. For more news and updates on politics, world, sports, entertainment and lifestyle, log on to our website latestly.com).