Maharashtra Political Crisis: ’Will Set Up Separate Block of Shiv Sena, Not Merging With Any Other Party As We Respect Uddhav Thackeray', Says Rebel MLA Deepak Kesarkar

Asserting they are still part of the Shiv Sena, one of the rebel MLAs Deepak Kesarkar on Saturday said the dissident legislators would be setting up a separate block of the party. 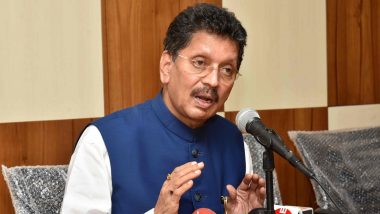 Guwahati, June 25:  Asserting they are still part of the Shiv Sena, one of the rebel MLAs Deepak Kesarkar on Saturday said the dissident legislators would be setting up a separate block of the party.

In a press conference here at Radisson blu hotel where he has been camping along with 40 other rebel Shiv Sena MLAs, Kesarkar, speaking on behalf of the rebels and their leader Eknath Shinde, said they are still part of Shiv Sena, and aiming to take a different direction for which they have the desired majority. Maharashtra Political Crisis Live Updates

"At this point, we are not merging with any other party as we respect (Maharashtra Chief Minister) Uddhav Thackeray. We will be setting up a separate block," he told reporters.

"If our faction does not get the recognition, to prove our numbers we will go to the court," Kesarkar said, adding the rebel MLAs won't quit the Sena rather will carry on the legacy of "Balasaheb".

"This is nothing but a constitutional struggle. We are not leaving the ideology that Balasaheb lived on. We didn't do anything illegal or wrong."

He also said there can be no Shiv Sena without Uddhav Thackeray.

Referring to the incidents of attacks on residences and offices of the rebel MLAs in Maharashtra, Kesarkar said: ''We also want to tell the Chief Minister to fulfil the constitutional responsibility he has and ensure that the violence is stopped. The MLAs are not feeling safe to return as no stern action is being taken against the perpetrators."

Meanwhile, Assam Chief Minister Himanta Biswa Sarma on Saturday told reporters: "I have nothing to say about Maharashtra politics... Assam will not deal with the matter of Maharashtra."

Sarma further said: "One can file an RTI to know about the hotel expenditures. This is our job to provide security, the comfort of staying to anyone who has come from outside to the state."

Meanwhile, the Assam units of Shiv Sena and NCP staged a protest against rebel MLAs outside the Radisson Blu hotel.

They were later removed from the spot.

(The above story first appeared on LatestLY on Jun 25, 2022 08:46 PM IST. For more news and updates on politics, world, sports, entertainment and lifestyle, log on to our website latestly.com).