The man is seen clinging to outside of moving Nanded -Bengaluru Express train. 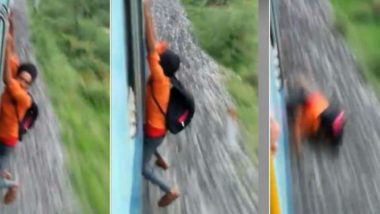 Mumbai, July 13: A horrific video of an accident has emerged in which a man is seen falling off from Nanded -Bengaluru Express train. The entire reportedly took place on July 12, and a video of it has gone viral on social media. It was not clear whether the man fell accidentally or he was doing a stunt.

The man is seen clinging to outside of moving Nanded -Bengaluru Express train. As soon as he tries to touch the ground, he falls off the train because of the speed. The man sustained severe injuries in the accident. Watch the video of the horrific incident below:

There have been several incidents in the past when people put their lives at risk to perform stunts. Indian Railways runs campaign against such deadly adventures but people ignore and put themselves into trouble.

(The above story first appeared on LatestLY on Jul 13, 2018 09:48 PM IST. For more news and updates on politics, world, sports, entertainment and lifestyle, log on to our website latestly.com).