Mumbai-Gorakhpur Antyodaya Express: A Trolley of 2nd Coach Derails Between Kasara And Igatpuri, No Injuries Reported 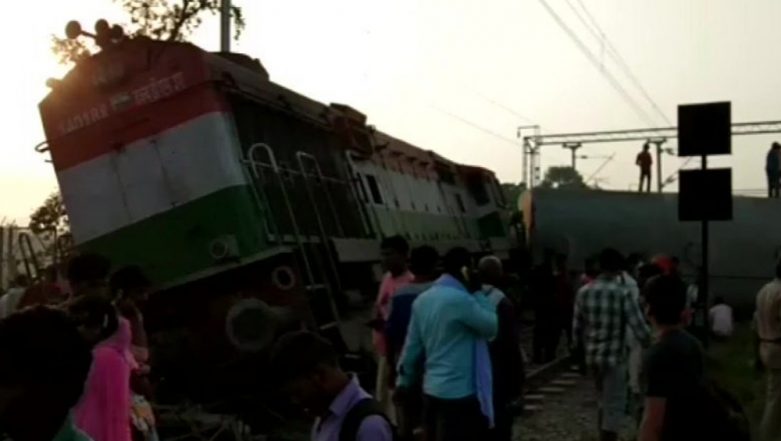 Maharashtra, July 18: In an accident that took place in the early hours of today, one trolley of 2nd coach, of 12598 CSMT-Gorakhpur Antyodaya Express got derailed between Kasara and Igatpuri ghat section at about 3.50 hours. According to a tweet by Central Railway, no injury has been reported. The Middle line & UP line is available for traffic. More updates on this matter will follow. Sahyadri Express Train Accident Averted on Mumbai-Pune Route After CCTV Captures Boulder Lying on Railway Track.

The railways have also issued a helpline number - 022-22694040. Last month, Sahyadri Express train accident was averted on Mumbai-Pune route after CCTV captured boulders lying on Railway tracks. A huge boulder had fallen on the tracks near Lonavala at 8:15 pm, due to which Mumbai-Kolhapur Sahyadri Express was delayed for over two hours. Sunil Udasi, Chief Spokesperson, Central Railway was quoted saying, "The monitoring staff not only alerted higher authorities but also ensured that power supply to the overhead equipment was switched off and oncoming trains were stopped well in time."

Early this month, a goods train was derailed between Jambrung and Thakurwadi in the Karjat-Lonavala section in Maharashtra resulting in the cancellation and rescheduling of several trains. In the wake of the accident, inter-city trains leaving Mumbai for Pune on Monday were cancelled and long-distance trains from Mumbai via Pune were diverted via Igatpuri. The local train services were, however, not affected.