Article 360 Not to be Imposed: FM Nirmala Sitharaman Says No Plan to Announce Financial Emergency Amid Coronavirus Outbreak 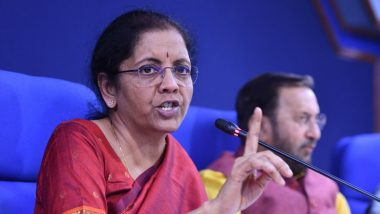 New Delhi, March 24: Finance Minister Nirmala Sitharaman on Tuesday quashed media reports that the Centre could impose financial emergency under Article 360 of the Constitution to tackle economic crisis erupted in India due to coronavirus outbreak. The Finance Minister denied these reports while briefing media through video conferencing. What is Article 360? All About The Law Which Allows The Centre to Impose Financial Emergency.

Recently reports surfaced that the Narendra Modi government could impose financial emergency to tackle the outbreak of COVID-19. However, there was no confirmation from the government. Updates of Nirmala Sitharaman's Press Briefing.

Article 360 is a law, which allows the President - on advice of the Prime Minister and his Council of Ministers - to impose a state of financial emergency. Once imposed, it empowers the Centre to direct states on how to use their financial resources. The law would also allow the central government to revise the salaries of officials employed by the states as well as the Union.

Sitharaman on Tuesday made series of financial announcements to tackle the coronavirus menace. The Finance Minister announced compliance and regulation on Income tax, GST, Customs and Central Excise, Ministry of Corporate Affairs, Insolvency and Bankruptcy Code, Fisheries and Bank-related compliance. All last dates and deadlines of document submission and compliance, has been moved to June 30.

(The above story first appeared on LatestLY on Mar 24, 2020 03:06 PM IST. For more news and updates on politics, world, sports, entertainment and lifestyle, log on to our website latestly.com).