Bharat Bandh on March 26: Rail, Road Transport Services Likely To Be Affected As Farmer Unions Call for Nationwide Shutdown; Know What Will Remain Open and Closed

Farmers protesting against the three farm laws passed in Parliament last year have called a complete Bharat bandh on Friday, March 26, 2021. Notably, on March 26, the farmers' protest at Delhi's borders-Singhu, Ghazipur and Tikri, against the farm laws completes four months. 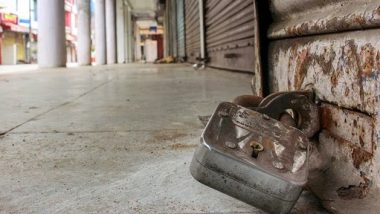 The farmers have been protesting against the three farm laws that include- Farmers' Produce Trade and Commerce (Promotion and Facilitation) Act, the Farmers (Empowerment and Protection) Agreement on Price Assurance and Farm Services Act, and the Essential Commodities (Amendment) Act, which were passed by Parliament in September 2020.

Bharat Bandh will be observed for 12 hours on Friday, March 26, from 6 am to 6 pm. All road and rail transport, markets, and other public places will be closed across the country. Trade unions from organised and unorganised sectors, and transport and other associations have extended their support for the ''Bharat Bandh'' call of farmer organisations on March 26.  Farmers' Protest: Farmer Leaders Reject Centre's Proposal to Constitute Committee on Farm Laws, Stay Implementation for 18 Months.

Bharat Bandh: Here's What Will Remain Open and Closed

So far, there have been 11 rounds of talks between the protesting unions and government, but deadlock continued as both sides stuck to their stand. Thousands of farmers, mostly from Punjab, Haryana and western Uttar Pradesh, have been camping at the Delhi border points for over four months, demanding the repeal of farm laws and a legal guarantee on the minimum support price (MSP) for their crops.

(The above story first appeared on LatestLY on Mar 25, 2021 09:18 PM IST. For more news and updates on politics, world, sports, entertainment and lifestyle, log on to our website latestly.com).