Bihar Shocker: Dalit Man Forced To Lick Spit and Drink Urine by Panchayat in Gaya for Eloping With Woman

In a shameful incident, a Dalit man was forced to lick the spit from the floor and was made to drink urine by a panchayat. 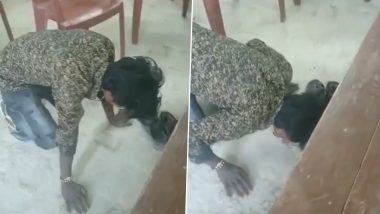 Gaya, April 14: In a shameful incident, a Dalit man was forced to lick the spit from the floor and was made to drink urine by a panchayat. A video of the incident that took place in Wazirabad area of Bihar's Gaya district emerged on social media on Tuesday. The treatment meted out to the Dalit man was a form of "punishment" because he had eloped with a woman he was in love with. Dalit Woman Paraded Naked, Beaten up in Bihar; RJD leader, Four Others Sentenced to Seven Years in Jail.

The video shows several people spitting on the floor during a panchayat. The Dalit man is seen kneeling down and licking spit from the floor. Reports said he was also made to drink urine by the panchayat. The sarpanch was reportedly present when the man was given inhuman treatment. The panchayat's action came after the victim confessed to his romantic relationship with a woman.

The Dalit man admitted that he had eloped with the woman recently. The woman's family caught the couple and the man was produced before the panchayat members. After the video emerged online, the Gaya Police took cognizance of the matter. Subsequently, a case was registered. Dalit Groom Forced to Get Down From Horse, Guests Thrashed Allegedly by Upper-Caste People in Bhilwara.

According to Gaya SSP Aditya Kumar, six people have been arrested in connection with the incident so far, while 14 people have been charged under various sections of the Indian Penal Code and SC/ST Act. The senior cop assured action will be taken against all those who are involved.

(The above story first appeared on LatestLY on Apr 14, 2021 11:43 AM IST. For more news and updates on politics, world, sports, entertainment and lifestyle, log on to our website latestly.com).