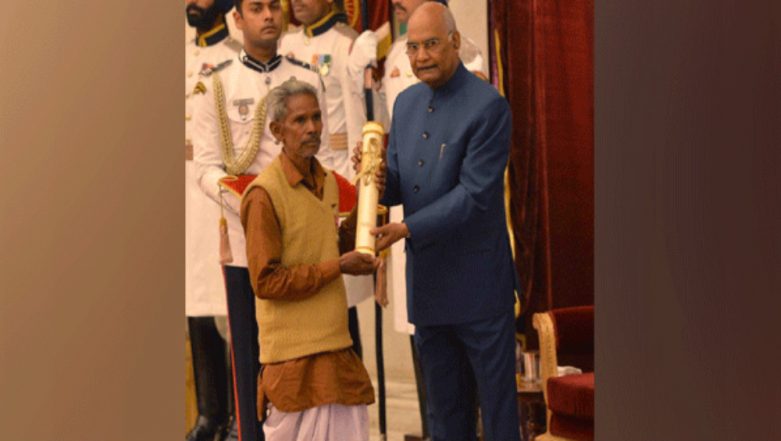 Banspal Block, June 30: Padma Shri awardee Daitari Naik, who claims he is struggling to make his ends meet, on Saturday denied returning the prestigious award. Naik was conferred with a Padma Shri for single-handedly carving a three-kilometre-long canal from a mountain stream in Odisha.

The clarification from Naik, popularly known as 'Canal Man of Odisha', came after reports surfaced of him planning to return the honour as he has not got any aid from the government.

"Though I am facing difficulty in day to day life, there is no question of returning the award. The government must make efforts to reconstruct the canal so that all the villagers can be benefitted," he said while speaking to ANI. German Padma Awardee Friederike Irina Says 'Just Want to Serve Cows, Won't Return Honour'.

"Award (Padma Shri) was given to me for my hard work and it is a matter of pride for me and my family. Why will I return it?" he asked. Naik also denied eating ant's eggs for survival. "I never ate ant's eggs because I am not a fish. All this is false and fabricated news.

"Echoing similar views, Naik's son Alekh said the news displayed by the media so far on his father's poverty is fabricated. "All this news about my father is fabricated. They have been displayed to portray a negative image of my father. It is right that my father has made some demands from the government for the benefit of villagers like the reconstruction of the canal and Anganwadi in the village. The government must fulfil it at the earliest."

According to District Administration officials, Naik has been covered under various Social Security schemes of the government. He gets rice every month under the Food Security Scheme. He and his wife are getting old age pension under Madhu Babu Pension Yojana. As per the District Administration, "Naik had already been assisted under the Rural Housing scheme in the year 2013-14. His two sons have also received two houses under Rural Housing in the year 2017-18 and are presently staying in those houses. Naik has also been given financial assistance under State government's farmers' assistance scheme-KALIA."

As per the administration, reports saying Naik eats ant eggs for survival is "absolutely false". The administration urged that one should not insult the Padma Shri awardee by creating such fabricated news. "We have inquired into the matter. This is false, fabricated news. Naik has admitted that he is not eating ants. He has kept the Padma Shri in a side room, where he has also kept a baby goat that was born recently. The construction of Anganwadi in the village is underway.

The plan for proper canal lining and road connectivity is already prepared in this regard. It was just that we put the work on hold due to model code of conduct (MCC) in the recent elections," Ashish Thakre, Keonjhar District Collector, said.