In a shocking incident, a 31-year-old man arrived at a media house in Chandigarh and confessed on camera that he killed his girlfriend because she was allegedly cheating on him. 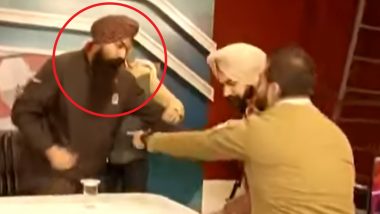 Chandigarh, January 15: In a shocking incident, a 31-year-old man arrived at a media house in Chandigarh and confessed on camera that he killed his girlfriend because she was allegedly cheating on him. Soon after Maninder Singh appeared on live TV, police reached the office of the channel and arrested him while he was giving the interview. The incident took place on Tuesday. Chandigarh: Drug Addict Rapes & Murders 8-Year-Old Girl For Resisting Goat Theft in Nuh, Arrested.

Maninder Singh's girlfriend Sarabjit Kaur, a nurse by profession, was found dead inside a hotel room on January 1. During the investigation, police found Singh had briefly stayed at the same hotel. However, cops could not track his whereabouts. On Tuesday, Singh walked into the office of News18, about three kilometres from the police station where the murder case has been registered against him, and confessed to killing Sarabjit.

Prior to his arrest, Singh told the channel that he had suspected Sarabjit of having an affair with her sister-in-law's husband. He also said that Sarabjit's family was against their inter-caste marriage. "Marriage talks between my family and Sarabjit’s family had been going on for six months but her family would always create problems, sometimes saying I am not from their caste and sometimes rejecting me for not having a government job," he said.

On December 31, Singh and Sarabjit had an argument over the same issue and the next day she was found with her throat slit. As soon as the police got to know about Singh's presence at the News18's office, they reached there and took him into custody. In 2014, Singh was convicted for killing another woman friend in Karnal. He was out on bail when he allegedly killed Sarabjit.

(The above story first appeared on LatestLY on Jan 15, 2020 06:04 PM IST. For more news and updates on politics, world, sports, entertainment and lifestyle, log on to our website latestly.com).