A 48-year-old man set himself ablaze in front of the residence of Chief Minister M.K. Stalin here on Monday morning, police said. 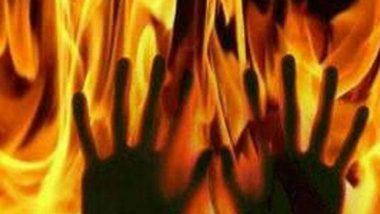 He was rescued by the police personnel stationed at the residence and admitted to the Kilpauk Medical College with 40 per cent burns.

The police said the man has been identified at Vetrrimaran from Tamil Nadu's Tenkasi district and the reasons for his suicide attempt were not yet clear. Uttar Pradesh Shocker: Man Sets Wife, Mother-In-Law Ablaze Before Torching Self, Dies.

The Abhiramapuram police have registered a case. The police said that his condition was critical.

(The above story first appeared on LatestLY on Sep 27, 2021 04:04 PM IST. For more news and updates on politics, world, sports, entertainment and lifestyle, log on to our website latestly.com).