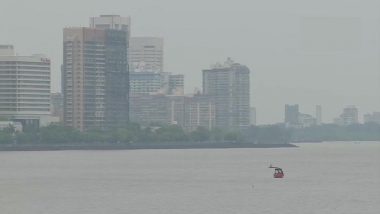 Mumbai, June 3: The Brihanmumbai Municipal Corporation (BMC), the civic body of Mumbai, called for structural inspection of temporarily set up COVID-19 health centres due to the onset of cyclone Nisarga. The municipal body has directed the contractors of the respective healthcare facilities to once again review the safety and stability of the structures set up by them. Cyclone Nisarga Live Tracker Map: Check Movement, Forecast and Path of Severe Cyclonic Storm Which Will Make Landfall Near Alibaug on June 3.

The fresh order was issued on Wednesday, hours before the cyclone was expected to hit the Alibaug and subsequently impact Mumbai. If the COVID-19 facilities - temporarily set up - are found to be unsafe in the second review, then the patients would be shifted to other medical centres in an expedited manner.

"As per IMD, there's possibility of 'nature' cyclones/strong winds with rains in BMC area. So, structured inspection of #COVID19 Health Centers set up temporarily at various places in BMC area should be done again by concerned contractors," said the statement issued by Greater Mumbai Municipal Corporation.

As per IMD, there's possibility of 'nature' cyclones/strong winds with rains in BMC area. So, structured inspection of #COVID19 Health Centers set up temporarily at various places in BMC area should be done again by concerned contractors: Greater Mumbai Municipal Corporation

The cyclonic storm in Mumbai comes amid a raging pandemic which has already strained the city's health infrastructure. Section 144 of the CrPC has been imposed in Mumbai to ensure minimum public presence amid the cyclone. Several low-lying parts of the city and suburbs have been evacuated and the residents shifted to community halls and shelter centres for temporary stay.

The Mumbai Metropolitical Regional Development Authority (MMRDA) had on Tuesday shifted nearly 150 patients from the COVID-19 temporary facility in Bandra Kurla Complex (BKC) to another medical centre, considering the impact of cyclone.

Maharashtra Chief Minister Uddhav Thackeray announced that the relaxation in lockdown, which were scheduled to come into effect from today, have been annulled for two days due to the impact of cyclone. He has appealed the residents of coastal areas, including Mumbai and neighbouring satellite towns, to remain indoors as much as possible.

For Mumbai, this would be the most fierce cyclonic storm in over a century. Although the city has witnessed massive floods in 2005, 2017 and 2019 - the calamity was caused by Southwest Monsoon and not due to cyclones. According to Adam Sobel, professor of atmospheric science at Columbia University, Nisarga could be the most severe cyclonic landfall in Mumbai since 1891.

(The above story first appeared on LatestLY on Jun 03, 2020 10:03 AM IST. For more news and updates on politics, world, sports, entertainment and lifestyle, log on to our website latestly.com).