Delhi Assembly Elections 2020: Arvind Kejriwal Waits For His Turn At Election Office As Several Independents Turn Up to File Nomination

Incumbent Delhi Chief Minister and Aam Aadmi Party (AAP) leader Arvind Kejriwal on Tuesday waited for his turn at the Returning Officer's office on the last day for the filing of nominations. 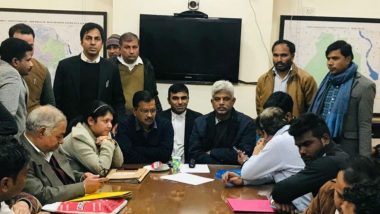 "Waiting to file my nomination. My token no is 45. There are many people here to file nomination papers. Am so glad so many people participating in democracy," Kejriwal tweeted a few minutes before the deadline. Speaking to NDTV, officials said that Kejriwal will be allowed to file his nomination papers as whoever has made it inside the office before 3 pm will be allowed to file their nomination. Delhi Assembly Elections 2020: BJP Spokesperson Naveen Kumar Attacks Arvind Kejriwal, Says 'Delhi Needs Vikas, Not Vinaash'.

A picture of Kejriwal sitting at the Returning Officer's office was also shared by news agency ANI. AAP leader Saurabh Bhardwaj blamed the Bharatiya Janata Party (BJP) for "sending" plenty of independent candidates to "delay" Kejriwal's nomination. "Around 35 candidates are sitting at the Returning Officer's office without proper nomination papers, even without names of 10 proposers," Bhardwaj told ANI.

"They are insisting unless their papers are complete and file nomination, they won't allow CM Kejriwal to file nomination. BJP is behind these people," the AAP leader alleged.

However, Kejriwal himself tweeted after Saurabh Bhardwaj spoke to the media. The AAP Convener in his tweet seemed to justify the delay in his nomination filing and said that it "doesn’t matter" as many are filing nominations for the first time and urged everyone to help them. Kejriwal said that everyone filing the nominations are part of his family.

Doesn’t matter. Many of them r filing for the first time. They r bound to make mistakes. We also made mistakes the first time. We shud hand hold them. I am enjoying waiting wid them. They r all part of my family. https://t.co/9s8hRDnjSU

Kejriwal missed filing his papers yesterday, having been delayed by his roadshow. He got late again today as he arrived with his family to complete the formalities. Polling for Delhi's 70 assembly seats will be held on February 8. Counting of votes will take place on February 11 and results will be announced on the same day.

(The above story first appeared on LatestLY on Jan 21, 2020 04:09 PM IST. For more news and updates on politics, world, sports, entertainment and lifestyle, log on to our website latestly.com).