Display of Photographs of Suspects in Newspaper or Digital Platforms, Parading Before Media by Police Violate Their Fundamental Rights: Madhya Pradesh High Court

The Gwalior bench of the Madhya Pradesh High Court has held that police producing victims and suspects before media is in violation of Article 21 of the Constitution which guarantees personal liberty. 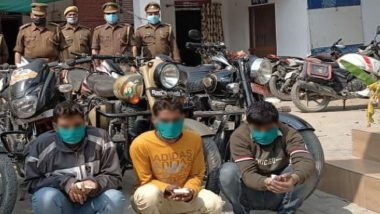 Gwalior, November 7: The Gwalior bench of the Madhya Pradesh High Court has held that police producing victims and suspects before media is in violation of Article 21 of the Constitution which guarantees personal liberty. The bench of Justice GS Ahluwalia also held that display of photographs of a suspect in a newspaper or digital platforms too violates his/her fundamental rights. Schools Can Recover Only Tuition Fees for Now: MP High Court.

"By producing the victims and suspects before the media, the police not only violate the fundamental rights of the suspect as enshrined under Article 21 of the Constitution of India but also encourage media trials," the Madhya Pradesh High Court noted while hearing a petition on Monday. It further said that the police, instead of "tapping its own back", should ensure the timely appearance of their witnesses so that the accused is held guilty.

"Disclosure of the identity of the suspects in the newspapers or on the digital platforms, or parading the suspects in the general public, even prior to the adjudication of the allegations by the Court of law is certainly infringement of fundamental rights of a suspect," Justice Ahluwalia held. The court emphasised on personal liberty and privacy of every person must be protected. OBC Quota Hike: Give Petitioners Affidavit Copy, HC Tells MP.

"The Privacy/ reputation/dignity of any person, including a hardcore criminal, cannot be violated, unless and until the reasonable restriction permits to do so. Even if a person is a hardcore criminal, but still his details/history sheet/surveillance has to be kept discreet and there is no question of posting the photographs of history sheeters even at police stations," it opined.

The court added: "Tarnishing the reputation of a person, by the police, on the basis of its own investigation, amounts to prejudging the correctness of the allegations, which is unknown to Indian Law, and a person is presumed to be innocent, unless and until he is convicted. Thus, without there being any statutory provision putting reasonable restrictions, the police cannot violate the fundamental rights i.e., Privacy/dignity/reputation of a citizen of India, on the basis of an executive instruction issued by the Director-General of Police."

The court made these observations while hearing a petition wherein a man alleged that his photographs in the custody of the police were made viral on social media, destroying his reputation in the society.

(The above story first appeared on LatestLY on Nov 07, 2020 10:18 AM IST. For more news and updates on politics, world, sports, entertainment and lifestyle, log on to our website latestly.com).