The meat of donkey is reportedly becoming popular in parts of Andhra Pradesh and people are ready to buy it for hefty prices. 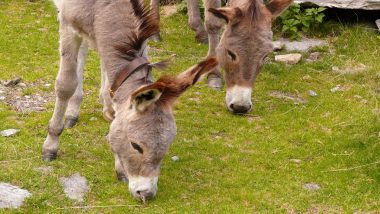 Visakhapatnam, February 23: The meat of donkey is reportedly becoming popular in parts of Andhra Pradesh and people are ready to buy it for hefty prices. According to a report, donkeys are being slaughtered in Andhra Pradesh's West Godavari, Krishna, Prakasam and Guntur districts. Notably, donkey is not registered as a "food animal", hence, its slaughter for consumption is illegal in the country. Journalist Takes Funny Interview Of Donkey, Gives Important Message to COVIDIOTS Roaming Outside Without Wearing Facemasks (Watch Video).

The report mentioned that several criminal gangs jointly operate the donkey meat racket in Andhra Pradesh as there is a rise in demand. According to Gopal R Surabathula, secretary of NGO called Animal Rescue Org, donkeys are being brought from other states such as Tamil Nadu, Uttar Pradesh and Maharashtra for slaughter. Surabathula's NGO has reported an illegal trade of donkey meat at Panduranga Road in West Godavari's  Venavallivaripeta. Bizarre! Donkey Arrested on Gambling Charge by Police in Pakistan's Punjab.

"The state government must protect the donkeys. Law enforcement must save the donkeys from ending up on our dinner plates. Otherwise, people will have to go to the zoo to see donkeys," Surabathula was quoted as saying. Reacting to the complaint, G Nehru Babu, who is joint director of animal husbandry in West Godavari, made it clear that slaughtering of donkeys is illegal.

"We will take serious action against people who indulge in the crime. Unnecessary misconceptions make people eat milk and meat of donkeys," Babu said. Guntur (urban) SP RN Ammi Reddy has assured a crackdown on donkey meat traders. Those who consume donkey meat believe it increases strength and virility.

(The above story first appeared on LatestLY on Feb 23, 2021 11:38 AM IST. For more news and updates on politics, world, sports, entertainment and lifestyle, log on to our website latestly.com).