Firecrackers Banned in West Bengal Ahead of Diwali, Calcutta HC Says Burning and Sale of Firecrackers to Remain Prohibited This Year

The West Bengal government had been appealing to people to refrain from using firecrackers during Kali Puja and Diwali festivities in view of the COVID-19 pandemic. The state government of West Bengal had been appealing to people to avoid bursting firecrackers during the festive season to check air pollution which is hazardous for COVID-19 patients. 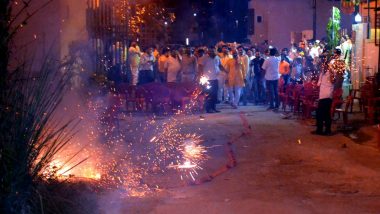 Kolkata, November 5: Ahead of the festive season of Diwali, the Calcutta High Court on Thursday banned firecrackers in West Bengal. With the latest order, the burning and sale of firecrackers will remain prohibited this year across the state. The West Bengal government had been appealing to people to refrain from using firecrackers during Kali Puja and Diwali festivities in view of the COVID-19 pandemic and also to check air pollution which is hazardous.

"With everybody's cooperation, we want to hold the Kali Puja and Diwali festivals avoiding firecrackers. The administration appeals to people to avoid firecrackers," Chief Secretary Alapan Bandyopadhyay had said. Responding to the government's plan of refraining from using firecrackers, a fireworks makers' association in the state urged the authorities to reconsider the move.

President of 'Poschim Bango Atosbazi Unnayan Samity' Babla Roy was quoted by PTI saying that the livelihood of around four lakh people in the state will be at stake if manufacture and sale of fireworks are stopped. Roy urged the Chief Minister''s Office to grant permission to burst fireworks from 8 pm to 10 pm on November 14 and 15, Kalipuja and Diwali.

Earlier this week, the Odisha government had banned the sale and use of firecrackers across the state during the festive season to check air pollution which can aggravate health conditions of COVID-19 patients. The period of the ban is from November 10 to 30, according to a government order.

(The above story first appeared on LatestLY on Nov 05, 2020 06:05 PM IST. For more news and updates on politics, world, sports, entertainment and lifestyle, log on to our website latestly.com).