After the visit, he instructed to follow all the measures directed by the Delhi government to stop dust-pollution. He said that if FICCI does not install anti-smog guns then the demolition work will be stopped and a penalty will be imposed. 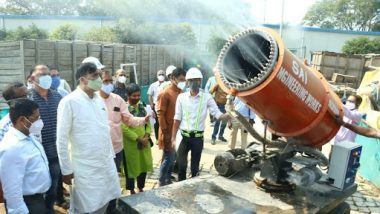 New Delhi, October 9: Delhi Environment Minister Gopal Rai on Friday monitored the demolition work at Pragati Maidan and FICCI. After the visit, he instructed to follow all the measures directed by the Delhi government to stop dust-pollution. He said that if FICCI does not install anti-smog guns then the demolition work will be stopped and a penalty will be imposed.  Rai said that violating the directions of the Delhi govt demolition work was going on at the FICCI campus. He said that work can only start after the installation of anti-smog guns.

Especially when the workers come to the construction site with the material, it has been instructed to cover and bring the material. The Delhi government has released a guideline for small to large construction sites. Around 14 teams are monitoring whether the guidelines issued by the government are being followed at the sites. Our effort now is to take all measures which can be taken to reduce pollution."

Environment Minister Gopal Rai today visited and monitored the ongoing demolition work in FICCI auditorium and Pragati Maidan. He said, "Anti-dust campaign is going on in Delhi. Dust pollution also increases considerably during the winter season. Out of 39 major construction sites identified inside Delhi, only 6 sites have not installed anti-smog guns, one of them is FICCI where demolition work is going on without anti-smog guns. We came to know yesterday that work is going on here even violating the government guidelines. I came to inspect the site yesterday evening as well, but the site was closed. Therefore, I inspected the site again today. We found that all the debris on the site was found lying uncovered. We have instructed to cover the open debris immediately and do not start working until the anti-smog gun is installed. Despite this, if work is resumed here, we will take action as per the rules. Also, the person or agency responsible for not following the guidelines will be fined as per rules. A notice will also be sent to the person/agency concerned by tomorrow. FICCI has found violating many rules and we will take strict action."

Rai said, "We will take stringent action if the guidelines are not followed. No relaxation can be given to anyone in this case. Anti-smog guns are just a solution, the main problem is dust and therefore water must be sprinkled. One way of sprinkling water is an anti-smog gun, which sprays water at a distance and it has a system which quickly pulls out the dust.  To prevent dust pollution, the government has issued detailed guidelines regarding the sprinkling of water, covering the materials, movement of vehicles and debris etc.