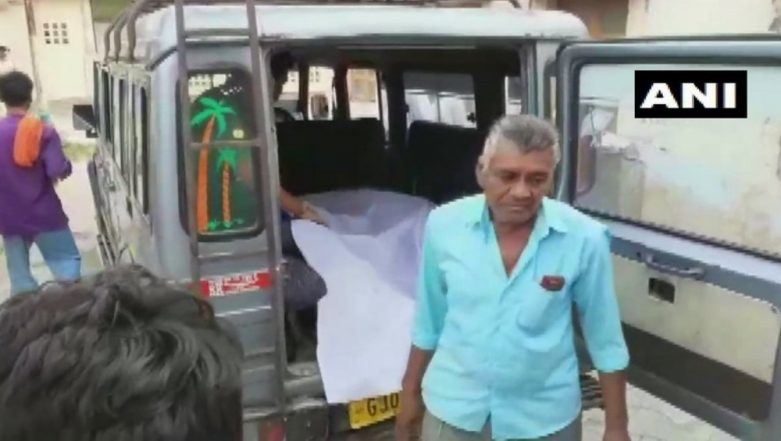 Ahmedabad, July 10: In a shocking case, a Dalit man was allegedly murdered by his upper-caste in-laws in Varmor village of Gujarat's Ahmedabad district on July 8, police said on Wednesday. The incident took place on Monday night when the victim, Haresh Solanki, went to his in-laws' house to persuade them to send his wife back, who was two-months pregnant. Honour Killing: 3 Arrested For Murder of Inter-Caste Couple in Karnataka's Mandya.

Solanki had married Urmilaben six months ago against her parents wish and had taken her to Gandhidham, where he lived with his parents. "Family of the woman wanted to break the marriage. They called their daughter home and didn't let her return. They invited the victim to have talks," police said.

Ahmedabad: A Dalit man Haresh Kumar Solanki murdered allegedly by his upper-caste in-laws in Varmor village on July 8. Police say, "family of the woman wanted to break the marriage. They called their daughter home&didn't let her return. They invited victim to have talks".#Gujarat pic.twitter.com/aYiB4yNw6n

His father-in-law had promised to bring her back, but the victim lost all communication with his wife. Worried about his unborn baby, Solanki called 181 women's helpline for counselling with the family. "While Solanki remained inside the vehicle, officials of the helpline service went to the house of his in-laws and tried to persuade them to send back Urmilaben," the official said.

When Urmilaben's relative came to know that Solanki was sitting in a jeep they rushed out of the house and attacked him with sharp weapons. Solanki sustained serious injuries to his head and other body parts and died on the spot. The "Abhayam 181" helpline service officials also sustained injuries.

A First Information Report (FIR) has been registered against eight people under relevant sections of murder, rioting, assault to public servant and under the Scheduled Castes and Scheduled Tribes (Prevention of Atrocities) Act. A manhunt has been launched to nab the accused.