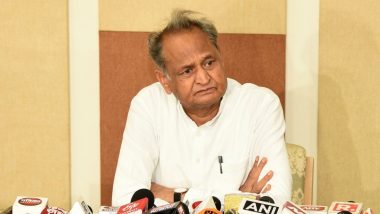 Jaipur, October 16: In view of the Gujjar Mahapanchayat called tomorrow in Bharatpur, the Rajasthan government has decided to block mobile internet and social media applications in some parts of the district from midnight. The ban will remain till Saturday midnight, and is likely aimed at preventing circulation of rumours or mass mobilisation of protesters amidst the COVID-19 pandemic. 4G Internet Services Restored in Jammu And Kashmir? Fake Order Regarding Restoration of High-Speed Internet Goes Viral on Social Media.

The administration has decided to clamp down on 2G, 3G and 4G internet services in parts of Bharatpur district, including Bayana, Weir, Bhusawar and Rupwas areas. In these locations, WhatsApp, Facebook, Twitter and other social media apps would be temporarily blocked till midnight of Saturday.

Gujjar leader Colonel Kirori Singh Bainsla, while speaking to reporters, said the "non-serious approach" of Ashok Gehlot-led government in the state has forced them to call the mahapanchayat.

"Several meetings have been held in the past requesting government to give compensation and jobs to the families of the people killed during the movement, and to withdraw lawsuits etc but the government has not fulfilled any demands and hence there is a huge rage among the Gujjar community," he was reported as saying by news agency IANS.

(The above story first appeared on LatestLY on Oct 16, 2020 10:37 PM IST. For more news and updates on politics, world, sports, entertainment and lifestyle, log on to our website latestly.com).