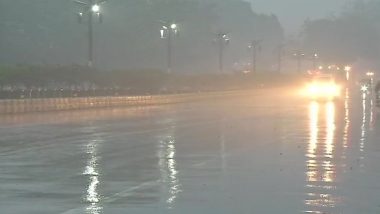 Nandyal, September 26: As many as 200 people have been evacuated from Nandyal town and its vicinity in Andhra Pradesh's Kurnool district following heavy rainfall even as the district officials appealed to people to abandon low-lying areas and seek refuge in government shelters. West Bengal Rains: Heavy Rainfall Leads to Multiple Landslides and Water-Logging in Several Areas.

"Nearly 200 people from the flood-affected places are taking shelter in government rehabilitation centres. I appeal to people to abandon all their low-lying homes for refuge in the government shelters," said Kurnool district collector G. Veerapandian.

He advised people to be careful as heavy to moderate rainfall has been forecast for the next three days. The flood-affected places include Nandyal, Mahanandi, Atmakur, Bandi Atmakur mandals and other places.

Veerapandian told people to reach out to officials whenever they need help, even as tractors and vehicles have been put on standby to transport them to safety.

On Saturday evening, the collector, accompanied by other officials visited a layout in Mahanandi on a harvester vehicle to survey the flood situation. In the layout, he instructed for a barrier to be broken to release flood water.

Cautioning people, Veerapandian told them not to enter any water body as they may look shallow from outside but contain powerful currents underneath which can wash people away.

Meanwhile, he released a statement busting a rumour which gained currency that Siddhapuram lake near Atmakur suffered a breach.

"Please do not fall for rumours that say Siddhapuram lake has suffered a breach near Atmakur in the district. There is no need to panic," he said.

Following continuous rains, heavy water inflows rushed in from Nallamalla forest areas and Srisailam backwaters, flooding Nandyal town and half a dozen places in the vicinity.

Many buildings and huts were hit by floods amid no loss of life.

A rescue team has also arrived at Nandyal subcollector's office, ready with boats for rescue operations.

A trough of 3.1 km above mean sea level is running from south Chattisgarh to south interior Karnataka, across Telangana and Rayalaseema.

There is also low pressure over east Bihar and neighbourhood and associated cyclonic circulation which is extending up to 3.1 km above the mean sea level.

"It is likely to become less marked by Sunday. The trough now runs from the cyclonic circulation associated with the low pressure area over east Bihar and neighbourhood to west central Bay of Bengal off Andhra Pradesh coast across northeast Jharkhand and Odisha, and extends between 1.5 and 5.8 km above mean sea level," said the official.

(The above story first appeared on LatestLY on Sep 27, 2020 12:04 AM IST. For more news and updates on politics, world, sports, entertainment and lifestyle, log on to our website latestly.com).