The incident occurred under the limits of Kushaiguda police station. However, no one was injured. 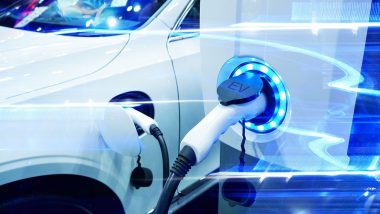 Hyderabad, August 15: In yet another incident, two electric bikes caught fire as their batteries exploded while charging in Hyderabad on Monday. The incident occurred under the limits of Kushaiguda police station. However, no one was injured.

T. Haribabu said he had recently purchased two electric bikes. He kept both the bikes on charging in front of his house around 4 p.m. An hour later, he heard a loud explosion and came out of the house to see both the two-wheelers engulfed in flames. He tried to put off the flames but by then both had completely gutted. Pune: Seven E-Bikes Gutted in Fire at Electric Bike Showroom, Overcharging Suspected; No Injuries Reported.

The fire also spread to nearby electric wires. On being alerted by locals, a fire tender rushed there and extinguished the fire. This is the second incident in Hyderabad in three days. A person was injured when the battery of an electric bike exploded in the NGO colony of Vanasthalipuram on Saturday.

The incident occurred when Koteshwar Rao turned the switch on to charge his parked bike, but it exploded. He suffered burn injuries on his hands and other parts of the body. He was admitted to a hospital. These are the latest in a series of such incidents in Telangana and Andhra Pradesh. A house was gutted when an electric bike caught fire while it was being charged in Siddipet district of Telangana on June 8. Electric Two-Wheelers Catching Fire: Ola Electric Recalls 1,441 Units of Electric Scooters.

An electric bike burst into flames in Hyderabad on May 11. There were no casualties. A man was killed and three others injured when the battery of an electric two-wheeler exploded in their house at Vijayawada in Andhra Pradesh on April 23. Earlier on April 19, an 80-year-old died and two others injured when an electric bike kept on charging burst into flames when they were asleep at their house in Telangana's Nizamabad town.

Concerned over the increasing incidents of electric two-wheelers catching fire, the Centre recently formed an expert panel to inquire into the matter.

(The above story first appeared on LatestLY on Aug 15, 2022 11:08 PM IST. For more news and updates on politics, world, sports, entertainment and lifestyle, log on to our website latestly.com).