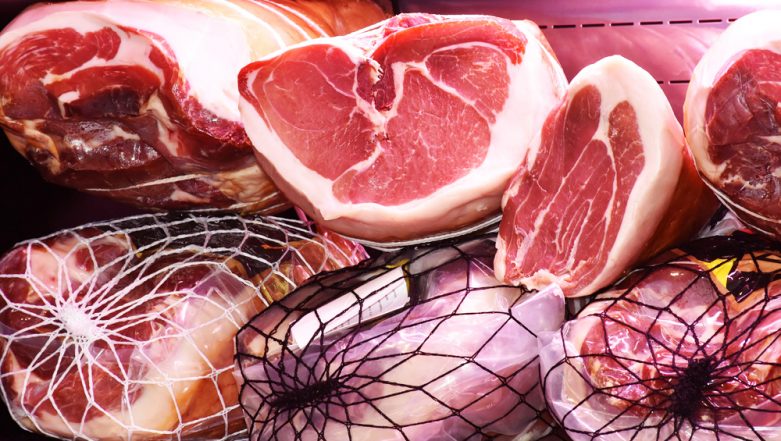 New Delhi, August 25: Researchers at IIT-Guwahati have developed lab grown meat, which is nutritious and will be a step towards cruelty-free food.

Lab-grown meat will open new vistas towards cruelty-free food thereby saving the environment as well as the animals, said Dr Biman B Mandal of IIT-Guwahati. In Biomaterial and Tissue Engineering laboratory, researchers have developed a novel technique formulated and patented for production of meat which is completely natural, he said.

"The taste of the final meat product will remain similar as raw meat but with improvised nutritional values as per customer needs. "Usage of external chemicals like hormones, animal serum, growth factors or antibiotics have been restricted in this preparation, hence it is safe on ethical concerns," Mandal said. Consumption of Red Meat and White Meat Equally Affects The Cholesterol Levels, Finds Study.

The livestock industry also contributes to waste water and more greenhouse gas emissions than all of the world's transport combined. Moreover, billions of animals are killed each year for meat, Mandal said. Muscle progenitor cells isolated from animals via small biopsies are grown on edible material base which is patented by the team, he explained.

Fat cells, cartilage cells or bone cells can be grown in conjunction with the muscle stem cells in different layers and is now being tried out, he said. "These tissue engineered meat are being cultured and grown in inexpensive culture media recently developed and patented in our laboratory, Mandal said. "This method can be manipulated depending on whether the consumer demands lean and fatty meat product, or a solid dry meat product to be available in various shapes and sizes. Daily edible components are being used to make the support matrix in order to increase the nutrient content of the meat product," he added.

The product, Mandal, can be printed in varying shapes and sizes using a 3D bioprinter with the edible components and preserved for future use. At the  penultimate stage, bioreactors will be used for large scale production of this product to achieve a yield of approximately 100 chickens from one chicken, he said. The lab grown meat made will have immense value in the Indian as well as the foreign market as it is nutritious and can be tuned for the high in demand needs of fast-food joints, Mandal said.

"Since our affordable meat product is expected to mimic natural meat in terms of taste, appearance, nutritive values, and will prevent slaughtering of animals, the same can cater to the growing demands of our country in the future," he added. The researchers have applied for a patent for the product.