Independence Day 2020: Security Beefed Up in Delhi-NCR Ahead of August 15 Celebrations 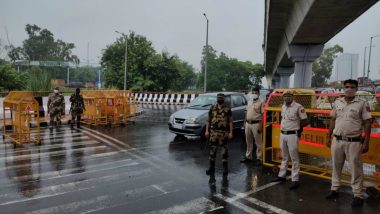 New Delhi, Aug 14: Ahead of the Independence Day celebrations on August 15, security has been beefed up in Delhi-NCR with multi-layered arrangements and strict vigil at the border areas. Apart from this, agencies like NSG, SPG and ITBP have been put on high alert.

"All the agencies will work in close coordination with each other to cater to all kinds of threat inputs. SWAT teams and Parakram vans have been strategically stationed," said a senior police officer. Independence Day 2020 Celebrations: Full Dress Rehearsal Held at Red Fort, Delhi Police Issue Traffic Advisory For August 15; Here is The Complete List of Roads to be Closed on Saturday.

Policemen in civil dress would be deployed at strategic locations across the capital with extra focus on in and around the Red Fort.

"We have also set up facial recognition systems at vantage points for suspect identification. This would help the security forces screen the suspects around the celebration area," the officer said.

Over 45,000 security personnel will be guarding the city on Independence Day besides over 2,000 snipers deputed at specific locations on high-rises in around 5 km periphery of the Red Fort.

Apart from securing the main venue at Red Fort, adequate security arrangements have been made for the function at the Rashtrapati Bhawan.

"All the necessary guidelines in view of the Covid-19 pandemic will be enforced," said a senior police officer, adding that there will be elaborate traffic arrangements with optimal deployment of staff, signages for public convenience measures.

At Least 20 teams of dog squad of the Crime Branch and several others from every district have been deployed to sniff out any trouble in the capital on Independence Day. Bomb disposal squads have also been put on alert and would be strategically placed in and around the Red Fort.

In Delhi, at least 350 police personnel who will be part of the guard of honour at the Red Fort have been quarantined ahead of the ceremony at the police colony in the Delhi Cantonment.

The Delhi Police have also advised people who have Covid-19 symptoms to avoid attending the event.

"In the case of any invitee experiencing or having a history of any symptoms of Covid-19 in the two weeks preceeding the Independence Day event, the invitee may consider refraining from attending the event," said a senior police officer.

In Ghaziabad, security has been beefed up and special search operations are being carried out for checking hotels, lodges, roadside eateries, bus stands and railway stations.

SSP Ghaziabad Kalanidhi Naithani said that two Quick Response Teams (QRTs) comprising sniffer dogs and bomb disposal squads have been constituted. One of the two teams would be headed by the Crime Branch SP and the other by the Police Lines SP.

(The above story first appeared on LatestLY on Aug 14, 2020 08:38 AM IST. For more news and updates on politics, world, sports, entertainment and lifestyle, log on to our website latestly.com).