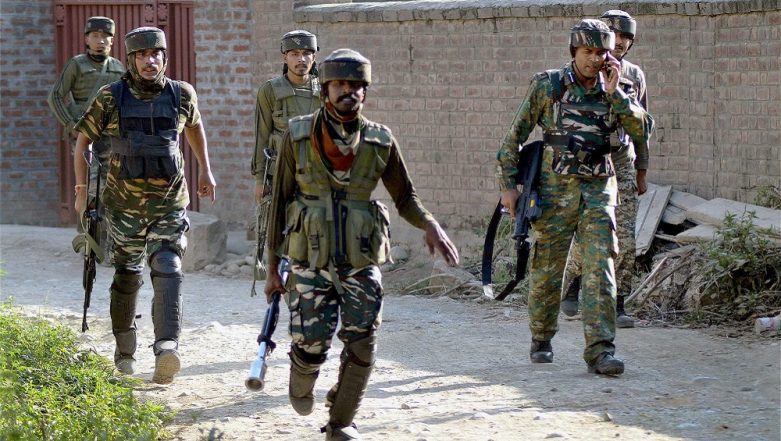 New Delhi, August 3: The Indian Army on Saturday refuted Pakistan Army’s allegations that it had used cluster bombs along the Line of Control (LoC) in Kashmir to “deliberately” target the civilian population. The Indian Army said, “Such responses are only against military targets & infiltrating terrorists who are aided by the Pakistan Army.” The Army further added that allegations of the firing of cluster bombs by India is yet another Pakistan's lie, deceit and deception. Jammu and Kashmir: Indian Army Soldier Killed in Pakistan Firing Near LoC in Kupwara.

The Indian Army alleged that Pakistan army regularly attempts to push terrorists through infiltrations and opens up with a multitude of weapons to assist them. India during numerous Directorate of Military Operations level talks, has maintained the right to respond. Indian Army Hits Terror Launch Pads Across LoC in Retaliation to Pakistan's Ceasefire Violation.

Indian Army: Such responses are only against military targets & infiltrating terrorists who are aided by the Pakistan Army. Allegations of firing of cluster bombs by India is yet another Pakistan's lie, deceit & deception. https://t.co/09twKEpwJs

Pakistan’s Inter-Services Public Relations (ISPR) on August 3, issued a press statement alleging the use of cluster munitions by India. According to the ISPR’s statement, the Indian Army, on the night of July 30-31, “targeted innocent citizens including women and children in Neelum Valley through artillery using cluster ammunition”. India-Pakistan Tension: Army, BSF Troops Along IB & LoC Put on Highest Degree of Alertness.

The ISPR further claimed that a total of 11 people were critically injured while two civilians, including a four-year-old boy, were killed. The ISPR termed the alleged use of cluster bombs as “blatant Indian aggression”.