IndiGo Aircraft Hit by Ladder of SpiceJet at Mumbai Airport Due to Strong Winds, Engine Cowling and Wings Damaged 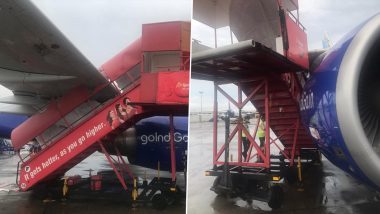 Mumbai, June 6: In a bizarre incident, an IndiGo aircraft was hit by a ladder of SpiceJet at the Mumbai airport on Saturday. According to a tweet by ANI, the wings of the IndiGo aircraft and engine cowling were damaged in the incident. The collision reportedly took place due to strong winds on Saturday morning as parts of the city received heavy rainfall since Friday night. On Saturday, residents of Mumbai and adjoining areas woke up to a rainy Saturday as pre-monsoon showers lashed these parts.

According to the weather bulletin by the India Meteorological Department (IMD), the spell was intense for about 30 minutes in the morning. The weather agency predicted that parts of the city will continue to receive light showers during the day. IndiGo, Vistara, GoAir, AirAsia, SpiceJet Twitter Exchange on Staying Parked, Staying Safe is Best Example of Co-Branding!

Maharashtra: Due to strong winds today, an IndiGo aircraft was hit by a ladder of SpiceJet at Mumbai Airport, leading to some damage to wings & engine cowling of the aircraft. pic.twitter.com/4Epr3VGkr4

Areas including Thane, Dombivli, Kalyan, Ambernath, Badlapur witnessed the pre-monsoon rainfall with moderate rains early morning. The Colaba weather station reported 18.6 mm rainfall in the 24 hours till 8.30 am on Saturday, while the Santacruz  weather bureau recorded 64.9 mm rainfall during the same period.

(The above story first appeared on LatestLY on Jun 06, 2020 01:02 PM IST. For more news and updates on politics, world, sports, entertainment and lifestyle, log on to our website latestly.com).