Two persons were detained on Wednesday in connection with a stone pelting incident between two groups in Jahangirpuri area of the capital. 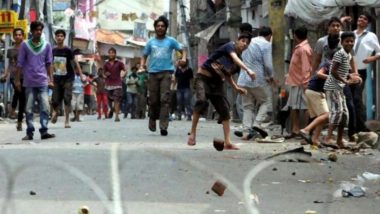 New Delhi, June 8: Two persons were detained on Wednesday in connection with a stone pelting incident between two groups in Jahangirpuri area of the capital.

The incident that took place on Tuesday night have sent panic waves in the area which had already witnessed a communal tension during Hanuman Jayanti.

Two persons -- identified as Vishal and Veeru -- have been detained.

A CCTV footage of the incident accessed by the IANS shows people pelting stones at each other.

According to a police official, they got a call regarding the incident at around 10.45 p.m. on Tuesday night and a team was sent. Jahangirpuri Violence: Court Directs Delhi Police to Provide FIR Copies to 2 Accused.

"An inquiry revealed that one Zahir, along with some of his friends, came to I-Block in search of Sameer and Shoaib over an argument which took place two-three days back. They were allegedly drunk and when they couldn't find anyone, they pelted stones damaging glasses of three vehicles," he said.

There was no communal angle to the quarrel as both the groups belong to same community, the official said. However, contrary to his claim, the police have detained Vishal and Veeru who are from different communites.

(The above story first appeared on LatestLY on Jun 08, 2022 11:45 AM IST. For more news and updates on politics, world, sports, entertainment and lifestyle, log on to our website latestly.com).