Jalandhar: Tuition Teacher Marries Her Minor Student To Get Rid of 'Manglik Dosha'

In a bid to ward off manglik dosha from her kundli (birth chart), a tuition teacher in Punjab's Jalandhar married a minor student of her. 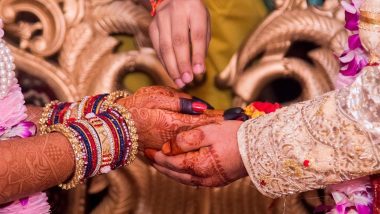 Jalandhar, March 18: In a bid to ward off manglik dosha from her kundli (birth chart), a tuition teacher in Punjab's Jalandhar married a minor student of her. The incident took place in Basti Bawa Khel area. The 13-year-old boy's parents lodged a complaint against the teacher, but later withdrew it allegedly under pressure. Police, however, said the two parties reached a settlement and the complaint was withdrawn. Punjab: Girls Escape from Jalandhar Ashram, Allege Lack of Facilities.

According to a report by India Today, the teacher told police said her parents were worried because a priest pointed manglik dosha or deficiency in her birth chart. The priest had suggested a symbolic marriage of her with a minor boy to get rid of dosha. Hence, the teacher told the boy's parents that he is required to stay at her home for a week for studies, according to the report. Punjab Police Officer Dragged On Car’s Bonnet by Rogue Motorist Violating COVID-19 Lockdown in Jalandhar; Watch Video.

During the "confinement", the teacher and her family members forcibly performed marriage rituals including a haldi-mehndi ceremony and suhagrat (wedding night). She was later declared a widow by breaking her bangles. The incident came to the light when the boy returned home and narrated the incident to the family.

Speaking to India Today, Station House Officer of Basti Bawa Khel Police Station Gagandeep Singh Sekhon said the boy's parents had lodged a complaint but the same was withdrawn after a compromise between the two parties. It was reported that the accused teacher visited the police station to bury the matter and allegedly compelled the boy's parents to withdraw their complaint.

(The above story first appeared on LatestLY on Mar 18, 2021 01:32 PM IST. For more news and updates on politics, world, sports, entertainment and lifestyle, log on to our website latestly.com).