Jammu and Kashmir: Drone Grid Set Up To Monitor Security of Minority Workers in Kashmir Valley Amid Civilian Killings

Under the drone grid system, the identified areas will be monitored directly from the control room and any suspicious movements of persons in those areas will be marked to the local security personnel deployed on the spot to prevent any attacks. 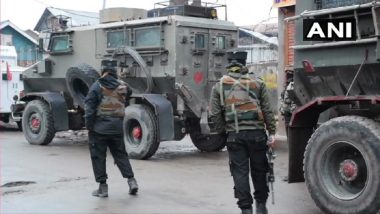 New Delhi, October 22: Security agencies have decided to set up a "drone grid" to monitor the security of the minorities living in the Kashmir Valley in wake of the recent killings of civilians.

The sources aware of this development said that the decision was taken after a meeting held with the all security agencies recently and it was decided that the Central Reserve Police Force (CRPF), along with the Jammu and Kashmir Police, will keep constant surveillance at at least 15 identified pockets in the Valley wherein most of the minorities reside via drone.

Other central security agencies will also cooperate in this surveillance to prevent the killings of innocent non-Kashmiris and migrant workers, who are also living in these pockets.

Under the drone grid system, the identified areas will be monitored directly from the control room and any suspicious movements of persons in those areas will be marked to the local security personnel deployed on the spot to prevent any attacks. Jammu and Kashmir: 2 More Non-Local Labourers Killed, 1 Injured After Being Fired Upon by Terrorists at Wanpoh Area of Kulgam.

The officials aware of these developments said that most of the migrant labourers and people from other states have been residing in these 15 identified areas, therefore, the security agencies pitched in for these new security arrangements.

In coming days, additional CCTV cameras will also be installed for better surveillance networks in most of the places which are prone to terror attacks, they added.

Union Home Minister Amit Shah will be visiting Jammu and Kashmir from October 23- 25 for the first time after the abrogation of Article 370. During his state he will review the security situation along with the progress of the ongoing developmental projects there. The officials also indicated that the security grid may be operational during the visit of Shah to Kashmir.

(The above story first appeared on LatestLY on Oct 22, 2021 11:30 PM IST. For more news and updates on politics, world, sports, entertainment and lifestyle, log on to our website latestly.com).