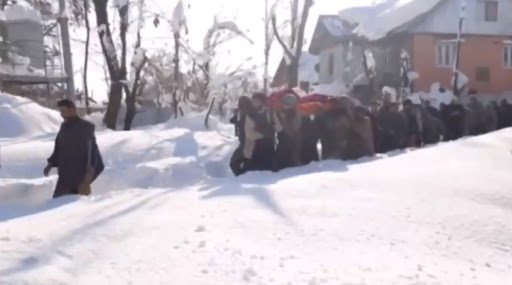 Srinagar, January 14: Indian Army is not only considered as one of the strongest globally, but respected for its human touch. In a latest, over 100 Army personnel from Chinar Corps division and 30 civilians walked along for four hours while an expecting mother was being carried on stretcher through snow. Baby born at hospital, and the mother and child are fine.

According to the incident, the personnel of the Indian Army helped an expecting mother Shamima, required emergency hospitalisation. They took to step to help her after they were approached by the locals. Around 100 Army personnel and 30 civilians walked along while she was being carried on stretcher through snow. Maharashtra: Navi Mumbai Police Saves Woman Attempting to Commit Suicide at Vashi Bridge, Watch Video.

Chinar Corps, Indian Army: During heavy snowfall, an expecting mother Shamima, required emergency hospitalisation. For 4 hrs, over 100 Army personnel&30 civilians walked along while she was being carried on stretcher through snow. Baby born at hospital;mother&child are fine. pic.twitter.com/0NuVqz9Yih

Also, the Indian Army soldiers extricated two civilians Tariq Iqbal and Zahoor Ahmed Khan, residents of Lacchipura after they being hit by snow slide. The personnel also provided them medical aid and evacuated to hospital for specialised medical care.