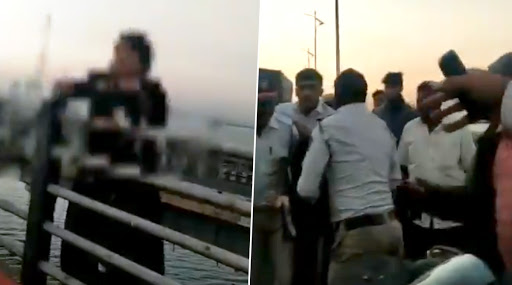 Mumbai, January 14: Maharashtra Police is considered to fair better in performance, when it comes to trust. Ensuring this faith, the personnel of Maharashtra Police saved the life of a woman in Vashi when she was trying to commit suicide by jumping off from the bridge. The incident took place on Tuesday, following which people are applauding the Navi Mumbai Police.

According to the incident, a mid -aged woman was trying to commit suicide by jumping from the Vashi bridge. She even created a scene before her attempt, but due to the immediate vigilant eyes of the police she was saved and traffic was cleared off from the Vashi bridge on the Sion-Panvel highway. Mumbai Police Earns Praise From Farhan Akhtar, Vir Das, Priyanka Chaturvedi and Other Celebs for Maintaining Peace During Anti-CAA Protest at August Kranti Maidan; See Twitter Reactions.

Today evening a lady attempt to end her life at Vashi Khadi bridge, however due to excellent presence of mind and prompt action by our Traffic Police staff we succeeded in saving a life. #GreatWork #GreatSave pic.twitter.com/IozpXe8IIA

Considered to one of the most helpful police in India, the police department in Mumbai and Maharashtra were also applauded for their humour quotient. Recently, Pune Police was in news for answering a person when he asked if 'LSD is Allowed'. To this, Pune Police replied, "Tell us where to find it?" Following this, Maharashtra Police tweet, "We could arrange the ‘pick up’ anywhere in the state!"