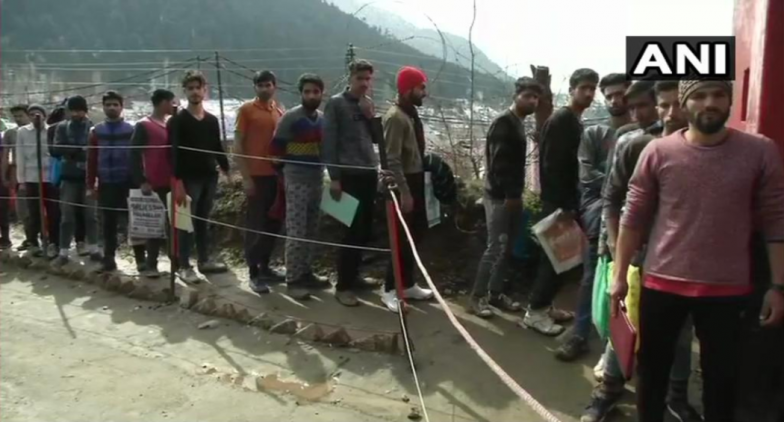 Baramulla, February 19: Several Kashmiri youths on Tuesday took part in an army recruitment drive in Jammu and Kashmir's Baramulla district. The recruitment is being done for the 111 vacant posts in Indian Army. As the condition in the state is volatile but it doesn't stop the aspirants' Patriotism to join the army. Jaish Militants Who Masterminded Pulwama Strike Eliminated Within 100 Hours of Attack: Indian Army.

Visuals from the recruitment area were shared by news agency ANI, which also shared images of aspirants. Bilal Ahmad, army aspirant, speaking to ANI, said, "We will get the chance to sustain our families and serve our nation, what else can one want?" Pulwama Attack Fallout: Home Ministry, J&K Administration Against Simultaneous Lok Sabha, Assembly Polls in State.

Jammu & Kashmir: Several Kashmiri youth take part in an army recruitment drive for 111 vacancies in Baramulla. Bilal Ahmad, army aspirant says, "We will get the chance to sustain our families and serve our nation, what else can one want?" pic.twitter.com/bmtMdYfvsk

Meanwhile, Lieutenant General Kanwal Jeet Singh Dhillon requested Kashmiri youths to not join terrorism. "I request all the mothers of Kashmir to please request their sons who have joined terrorism to surrender and get back to the mainstream. Anyone who has picked up the gun in Kashmir will be eliminated, unless he surrenders," he said. Dillon further added that the government's surrender policy will help youths to return to the mainstream.

On February 14, in a terror attack carried by Masood Azhar's Jaish-E-Mohammed in Pulwama district, at least 40 CRPF Jawans lost their lives. The attack was carried out by a suicide bomber who rammed his SUV filled with explosives to CRPF convoy. Within 100 hours of the terror attack, the army took a sting action and killed three Jaish operatives, including mastermind of Pulwama attack Abdul Rashid Ghazi alias Kamran.