Jharkhand Likely To Feel the Heat From Next Week As Mercury Is Expected To Touch 40 Degrees Celcius, Says IMD 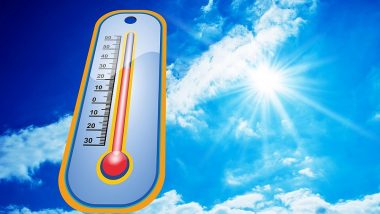 Ranchi will experience a range between 32 and 36 degrees. On Friday, the sky remained clear as the day progressed. In the past 24 hours, the weather across the state remained dry with Jamshedpur recording a maximum temperature of 36.3 degrees Celsius, while Medininagar in Daltonganj was coolest at 12 degrees. Delhi Records February's Warmest Day in Past 15 Years at 32.5 Degrees Celsius.

The weather department has predicted that the temperature is likely to move up by two degrees in another two to three days and will remain around 34 degrees.

(The above story first appeared on LatestLY on Mar 05, 2021 05:27 PM IST. For more news and updates on politics, world, sports, entertainment and lifestyle, log on to our website latestly.com).