Kashmir Sees First Snowfall of Winter Season 2020, See Beautiful Pictures of the Valley Drenched in a Carpet of Snow

Twitter is flooded with beautiful pictures of the winter season's first snowfall in the Kashmir valley. 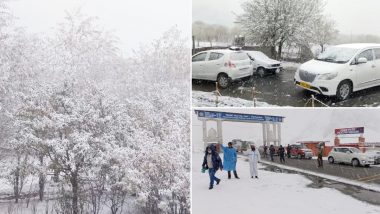 Srinagar, October 25: Winter has come knocking in Jammu and Kashmir, especially in the valley. Twitter is flooded with beautiful pictures of the winter season's first snowfall in the Kashmir valley. Locals have shared pictures showing areas drenched in a carpet of snow. Snowfall has been reported in Sonamarg, Drass, Pir ki Gali and other higher reached of Pirpanjal and the outer Himalayas in Kashmir. Kashmiri Boy, Zubair Ahmed Makes ‘Snow Car’ in Budgam, People Flood Twitter Timeline With Beautiful Images of the Icy Sculpture.

Pictures shared by local residents and media outlets show snow enveloping everything from trees to streets and from houses to vehicles. Snowfall on Mugal Road in Pir ki Gali led to disruption in vehicular movements. Jammu and Kashmir is gearing up for this year's winter. While snowfall converts the already scenic Kashmir valley into a more picturesque landscape, it also dearly affects the apple growers. Dal Lake in Srinagar Undergoes Cleaning Ahead of Winter Tourism.

Vehicular traffic movement on Mughal Road has been suspended, due to fresh Snowfall at Pir Ki Gali.#kashmir #Snowfall pic.twitter.com/SJ1DudVlrb

As winter is approaching, Kashmiris are buying Kangris in plenty. It is an earthen pot filled with ember used as a fire-pot to keep people warm when the temperature dips significantly. During the winter, Kashmir sees 'Chillai-Kalan', a 40-day long harshest period of the season when the chances of snowfall are most frequent and maximum, and the temperature drops considerably. The period ends on January 31.

(The above story first appeared on LatestLY on Oct 25, 2020 08:03 PM IST. For more news and updates on politics, world, sports, entertainment and lifestyle, log on to our website latestly.com).