In the wake of unprecedented COVID-19 surge, the Kerala government has set up multilingual call centres and opened control rooms to help migrant workers, who have come in search of job in the southern state. 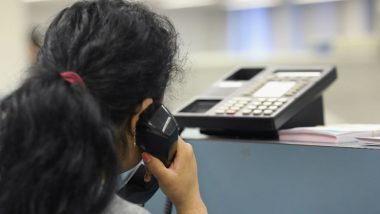 Thiruvananthapuram, Apr 29: In the wake of unprecedented COVID-19 surge, the Kerala government has set up multilingual call centres and opened control rooms to help migrant workers, who have come in search of job in the southern state.

As per the directions of Chief Minister Pinarayi Vijayan, the Labour Department has made several precautionary measures to ensure the safety of migrant workers, fondly being called as 'guest workers', during the time of the pandemic and elaborate arrangements to address their fears and concerns. COVID-19 Lockdown: Migrants Returning to Their Native Places; Rahul Gandhi Demand Govt to Put Money into Migrants Accounts.

"Call centres and control rooms have been set up for guest workers at the state level in the Labour Commissionerate here and also at 14 district headquarters," a Labour Department official said here.

Directions have been given to listen to their issues empathetically while arriving at the call centres and give them enough mental support to resolve and overcome it, the official said.

Bilingual officials are assigned in these centres to answer the queries and doubts raised by the guest workers, he added. Call centre services are available in various languages including Assamese, Oriya, Bengali and Hindi. Besides this, the existing facilitation centres of guest workers would also work as their help desk in various districts.

Assistant labour officers are deployed across the state to prepare the migrant workers to register in the COWIN portal and get them vaccinated, department sources said.

Posters and video-audio WhatsApp messages about COVID-19 have already been circulated in various languages to create awareness among the guest workers.

Besides visiting their dwellings to create awareness about the precautionary measures to be taken to fight the pandemic, the Labour department officials are also trying to ensure them timely ambulance service if necessary.

The Labour department is mulling to set up special firstline COVID treatment centres in Ernakulam and Thiruvananthapuram, the districts which have a comparatively huge guest worker population.

The railways have been approached to get details of guest workers, who are planning to return to their home state, they said adding that steps are also being taken to open facilitation centres in all major railway stations in the state.

Labour Commissioner S Chitra said the department is prepared to help them from ensuring smooth working conditions in the state to register their names in the designated portal for vaccination and preventing the spread of the virus infection among them.

"Steps will be taken to ensure that guest workers are paid by their respective employers during the time of their quarantine period," she added.

As per the figures, there are about 35 lakh migrant workers in Kerala.