Following a complaint from the People for the Ethical Treatment of Animals (PETA), police in Kerala's Palakkad district have arrested six people for conducting an illegal bullock cart race in Malampuzha village. 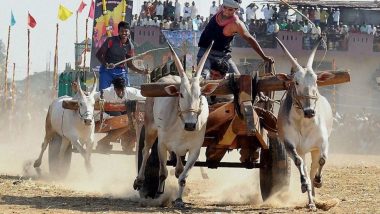 Thiruvananthapuram, Dec 28: Following a complaint from the People for the Ethical Treatment of Animals (PETA), police in Kerala's Palakkad district have arrested six people for conducting an illegal bullock cart race in Malampuzha village.

The animal protection group learned about the incident from a photo in The Hindu newspaper which showed two bulls being forced to run and their nose ropes being violently pulled.  Churuli: Kerala High Court Seeks Removal of the Movie From OTT Platform for Overdose of Foul Language

After submitting a formal complaint to the District Police Chief of Palakkad, PETA worked closely with the Deputy Superintendent of Police Palakkad, Haridasan on the matter.

The FIR, registered against the six persons, includes the provisions of Sections 3 and 11(1)(a) of The Prevention of Cruelty to Animals Act, 1960, which makes whipping and beating an animal and causing the animal unnecessary pain and suffering punishable offences.

All six accused were arrested and later released on bail.

"The Supreme Court and the High Court of Kerala have made clear that bull races are illegal, and there's no place in civilised society for whipping bulls and twisting and biting their tails, as is common at such events, to force them to run," said a PETA office bearer.

"Bulls used for work already have a hard life without the additional torment of being forced to race. We commend the Palakkad Police for showing that cruelty to animals will not be tolerated," added the official.

During the races, bulls run out of fear, and in an effort to escape pain. They arre commonly yanked by their nose ropes to the starting line, hit with bare hands and weapons like nail-studded sticks, and their tailbones are often broken at the joint in attempts to force them to run faster.

On September 5, 2014, the High Court of Kerala passed an order stating that it is bound by the observations and views of the 2014 Supreme Court judgment that upheld the ban imposed by the Central Government's Notification dated July 11, 2011. Kerala Shocker: 31-Year-Old Woman Throws Her Twin Children Into Well Before Attempting Suicide in Kozhikode; Arrested on Charges Of Murder

The High Court pointed out that the Supreme Court has categorically stated that bulls are not anatomically suited to racing.

(The above story first appeared on LatestLY on Dec 28, 2021 12:57 PM IST. For more news and updates on politics, world, sports, entertainment and lifestyle, log on to our website latestly.com).