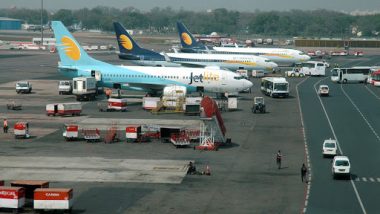 New Delhi, June 27: Delhi Air Traffic Control (ATC) on Saturday directed pilots of all airlines to take necessary precautions during landing and take-off of aircraft in view of locust swarms seen near the airport in areas along Gurugram-Dwarka Expressway.

A team has been set up to monitor the situation. "Pilots of all airlines have been warned about the locust has seen near the airport, we have set up a team to monitor in view of the locust," a senior ATC official told ANI. Locust Swarm Attack: Haryana Govt Issues Alert After 'Tiddi Dal' Enter Rewari, Gurgaon Districts.

Present Delhi Airport is operational and all flight movements are as per schedule, an airport official said. After the resumption of domestic flights operation, Delhi's Indira Gandhi International (IGI) Airport operates around 500 total aircraft in a day.

Swarms of locusts that have crossed over to India from neighbouring Pakistan have been causing havoc in Rajasthan, Punjab, Haryana and Madhya Pradesh ravaging standing crops for over a month now. On Saturday swarms were witnessed in multiple locations in the Gurugram district including at Sector-5, Palam Vihar.

India is facing its worst locust attack in recent years. The desert locust is a species of locust, a swarming short-horned grasshopper and poses an unprecedented threat to food supply and livelihoods of millions of people.

On Friday the Directorate General of Civil Aviation issued an operations circular on locusts to generate awareness amongst the aviation fraternity on the risks of flying through locust swarms. Stating that generally locust are found at lower levels and therefore pose a threat to aircraft in the critical landing and take-off phase of the flight," the DGCA warned that "almost all air intake ports of the aircraft will be prone to ingestion in large numbers if the aircraft flies through a swarm."

The DGCA circular said that the pilot's forward vision can be impeded if large numbers of the insects land on the windshield flagging it as a "grave concern during landing, taxi and takeoff phase." it said.

It urged pilots to consider against the use of wipers to remove the locusts from the windshields as it can cause spread of the smear even more. The circular said air traffic controllers, when aware of the presence of locusts nearby, should immediately inform all arriving and departing flights, the circular said.

The aviation regulator urged airlines to not fly flights during a locust invasion as far as possible. "The only favourable aspect is that locusts do not fly at night, thus providing better opportunity to sight and avoid them," the circular added.