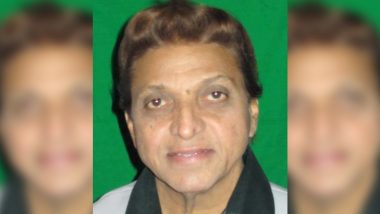 Reacting to Kanodia's death, PM Modi tweeted in Gujarati: "I am saddened by the death of Shri Mahesh Kanodia, a famous musician and singer from Gujarat. Shri Mahesh Kanodia made an important contribution in popularizing Gujarati folk music. I witnessed his impressive performance as a Member of Parliament for a long time." He added that he had spoken to Mahesh Kanodia's brother Hitu Kanodia and expressed his condolences. Gujarat BJP Member Dr Aditya Upadhyay, Former Minister Madhubhai Thakore's Wife Die of COVID-19 in Ahmedabad.

Gujarati celebs described Mahesh Kanodia's death as a great loss to the Gujarati cinema. Dharmesh Vyas, speaking to TOI, said: "It's shocking, Mahesh Bhai was not feeling well for a long time, and it's a big loss for the Gujarati industry. I bow to such a respectful virtuous soul. And I pray to God that his brother Naresh Bhai recover soon as we want him in the Gujarati cinema family, also I pray that God gives him strength for such a big loss."

"It's very heartbreaking news for the entire Gujarati cinema. Our true gem is no more, no words left to express," Hiten Kumar was quoted as saying. Mahesh Kumar Kanodia could sing in 32 singer’s voices including female voices. His brother Naresh Kumar Kanodia is also critical and on ventilator support.

(The above story first appeared on LatestLY on Oct 25, 2020 03:18 PM IST. For more news and updates on politics, world, sports, entertainment and lifestyle, log on to our website latestly.com).