A leopard, which was declared man-eater, was shot dead by hunters appointed by the forest department in Uttarakhand’s Pithoragarh district on Wednesday. 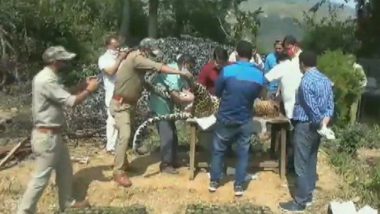 Pithoragarh, September 30: A leopard, which was declared man-eater, was shot dead by hunters appointed by the forest department in Uttarakhand’s Pithoragarh district on Wednesday. The leopard was declared man-eater after it mauled two people to death and injured another in Pithoragarh. The deceased included an 11-year-old girl. The carcass of the big cat has been sent for a post-mortem examination. Tallital: Leopard Enters House, Attacks Dog And Takes It Away, Watch Chilling Video.

"The 10-year-old leopard was shot dead in Sukauli forests by forest department hunter Sayyed Alibin Hadi. The hunter was called by the department from Meerut for the purpose," Pithoragarh Divisional Forest Officer Vinay Bhargav told PTI. The first victim of the leopard attack was a 40-year-old man who was killed on September 22. Two days later, the same leopard killed an 11-year-old girl when she was collecting fodder near her house in Chaana village. Tiger Spotted in Residential Area Near Jim Corbett National Park, ‘Human-Wildlife Conflict’ on Rise As Wildlife Corridors Shrink; Watch Video.

The big cat also attacked a man on September 26 who is still undergoing treatment. Subsequently, the forest department declared it a man-eater. This is the second declared man-eater leopard to be killed in Uttarakhand this month. On September 6, a leopard that had killed a 25-year-old man in Tehri Garhwal district was shot dead. In July, another leopard was shot dead in Chamoli district. It was declared a man-eater after it had killed a 12-year-old girl.

(The above story first appeared on LatestLY on Sep 30, 2020 07:08 PM IST. For more news and updates on politics, world, sports, entertainment and lifestyle, log on to our website latestly.com).