Three members of a family, including an 11-year-old boy, were found dead under mysterious circumstances inside a house in Uttar Pradesh's Mathura city. 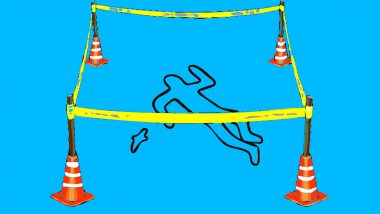 Mathura (Uttar Pradesh), February 8 : Three members of a family, including an 11-year-old boy, were found dead under mysterious circumstances inside a house in Uttar Pradesh's Mathura city.

The bodies were found in Farah area in Mathura on Sunday. The deceased have been identified as Neeraj Goyal, 35, his wife Reema, 30, and their son Anmol.

Mathura SP (City) M.P. Singh told reporters that Neeraj was found hanging from the roof, while his wife and son were found dead on the bed. He said, prima facie, it appeared that the wife and boy had been given some poisonous substance as they were frothing from their mouths.

According to the police, the house belonged to the deceased and it was locked from inside since Sunday morning. During the day, one of the neighbours informed the police. The door was broken open and the bodies were found.

Forensic teams have collected evidence from the crime site.

It appears to be a case of murder-cum-suicide, he added. The bodies have been sent for post mortem to ascertain the cause of death.

Singh said that preliminary investigations revealed that Neeraj, who owned a general merchant shop, got married to Reema three years ago and after marriage, their relationship was not going well. Though this was Neeraj's first marriage, Reema had been married twice earlier and Anmol was her son from her earlier marriage.

(The above story first appeared on LatestLY on Feb 08, 2021 11:50 AM IST. For more news and updates on politics, world, sports, entertainment and lifestyle, log on to our website latestly.com).