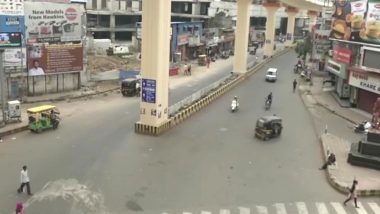 New Delhi, August 22: The Ministry of Home Affairs (MHA) on Saturday directed all states not to level restrictions on inter and intra-state movement of persons and goods. Union Home Secretary Ajay Bhalla wrote a letter to Chief Secretaries of all the states and union territories regarding this. Bhalla in his letter, said that any such restrictions amount to a violation of guidelines issued by the MHA.

The Union Home Secretary said that restrictions on the inter and intra- state movement of people and goods are impacting the supply chain, hence resulting in a disruption in economic activity & employment. He also said that no separate approval and e-permit would be required for such movement of persons and goods for cross-border land trade.

The Home Secretary's letter notes that there are reports that local-level restrictions on movement were being imposed by various districts and states. The letter says such restrictions were creating problems in inter-state movement of goods and services and impacting supply chains resulting in disruption of economic activity and employment.

The Centre on July 29 issued Unlock 3.0 guidelines -- the third phase of the lifting of coronavirus-related restrictions across the country, giving relief to inter-state and intra-state movement of people and goods. In the guidelines applied till August 31, the government scrapped night curfew and allowed yoga institutes to reopen.

(The above story first appeared on LatestLY on Aug 22, 2020 06:42 PM IST. For more news and updates on politics, world, sports, entertainment and lifestyle, log on to our website latestly.com).