Mumbai: 30-Year-Old Man Sentenced to 1 Year in Jail For Shouting ‘I Love You’ at Minor

A now-30-year-old man was sentenced to one year rigorous imprisonment for saying 'I love you' to a 13-year-old girl and repeatedly stalking her in 2015. The accused was arrested soon after the incident and was out on bail. 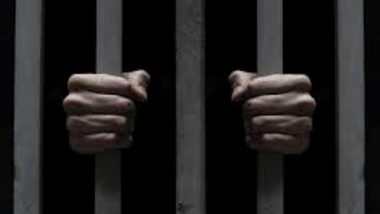 Mumbai, July 1: A now-30-year-old man was sentenced to one year rigorous imprisonment for saying 'I love you' to a 13-year-old girl and repeatedly stalking her in 2015. The accused was arrested soon after the incident and was out on bail.

“Considering the nature and gravity of the offences committed by the accused and that he is not a habitual offender, I am of the opinion that accused can be sentenced to suffer rigorous imprisonment for one year and fine of Rs 10,000," the court said. The court said that the amount is to be paid to the survivor at the end of the appeal period. Indian Origin Malaysian Jailed for Continuously Terrorising His Girlfriend

The prosecution's case is that in 2015 the girl was in the eighth grade. On April 17, 2015, at 4 pm, she had gone out for purchasing textbooks with her mother, reported TOI. When they were returning home a couple of hours later, the child was held back as her footwear broke. At that time an unknown person, the accused, came close to her so she screamed and informed her mother. She also told her mother that he was the same person who had been following her for a fortnight. The mother identified the boy as someone living in their neighbourhood. Tamil Nadu Shocker: 15-Year-Old Girl Dies After Taking Abortion Pills to Terminate Her Second Pregnancy in Thiruvannamalai; 2 Arrested

The accused ran away from the spot. Eventually, a report was lodged at the police station and the accused was subsequently arrested. The accused claimed that the child's father was a drunk who would create a ruckus in their neighbourhood. He said that since he had complained about him, he was falsely implicated. However, the court said that there was no evidence to prove this defence.

(The above story first appeared on LatestLY on Jul 01, 2022 09:02 PM IST. For more news and updates on politics, world, sports, entertainment and lifestyle, log on to our website latestly.com).

Comments
Tags:
Crime Crime News I love you Man Jailed For Saying I Love You Mumbai Mumbai news
Comments
You might also like