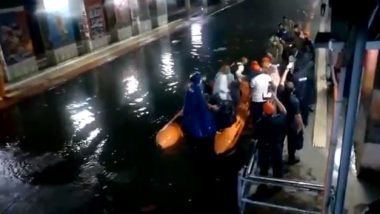 Mumbai, August 5: The National Disaster Response Force (NDRF), which was pressed into action on Wednesday to minimise casualties in the devastating rainfall in Mumbai, rescued over 150 commuters stranded in local trains. A video was also shared by the government agency showing their personnel evacuating locals from trains that were stuck on waterlogged tracks.

The clip shared by NDRF showed the rescue workers bringing out 40 local train passengers safely out of trains that were stuck between the Masjid and Bhaykhala stations on Harbour line in South Mumbai. Mumbai Rains: Heavy Winds Wreak Portion of DY Patil Stadium, Sway Lights of Wankhede, Bring Down Cladding of Jaslok Hospital (Watch Pics and Videos).

Wednesday was the second straight day when Mumbai was hit by incessent rainfall, bringing the city to a logjam. Traffic snarls were witnessed in some areas due to waterlogging, whereas, local train services were disrupted as the tracks on various routes remained submerged under water for several hours.

Apart from the incessent downpour, Mumbai was also hit by strong winds with a speed of up to 107 kmph. The signage atop the iconic Bombay Stock Exchange (BSE) building was damaged, the lights of Wankhede stadium were seen swaying and the cement cladding of Jaslok Hospital was spotted falling down.

State Cabinet Minister Aaditya Thackeray, who is also a legislator from Mumbai region, appealed the locals to remain indoors till the spell of rainfall subsides.

"Requesting all to remain indoors. Mumbai is lashed with high-velocity winds and extremely heavy rain as we all can witness. I request all, especially journalists trying to cover this to remain safe. Stay put wherever you are," he tweeted.

(The above story first appeared on LatestLY on Aug 05, 2020 10:53 PM IST. For more news and updates on politics, world, sports, entertainment and lifestyle, log on to our website latestly.com).