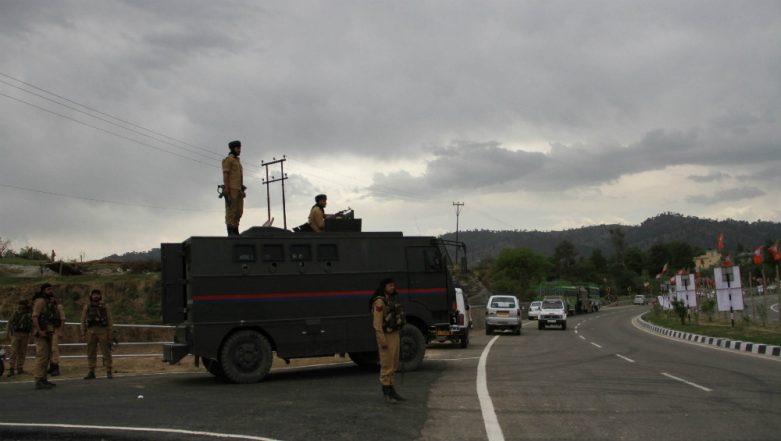 Chitragam Kalan, May 13: Terrorists on Monday evening fired upon a civilian at Chitragam Kalan in Jammu and Kashmir's Shopian district. The injured person, identified as Sajad Ahmad Ganaie resident of Chitragam kalan, has been admitted to a nearby hospital for further treatment. Reports state that Sajad Ahmad is a National Conference worker and close associate of Member of Legislative Council (MLC) Showkat Hussian Ganaie. Jammu And Kashmir: Two Terrorists Gunned Down in Shopian Encounter; Huge Cache of Ammunition Recovered.

To nab the accused, the area has been cordoned off. Meanwhile, a case has been registered and a probe has been initiated. Jammu and Kashmir Police Arrests Jaish-e-Mohammed (JeM) Terrorist Hilal Naikoo in Anantnag, Recovers Huge Cache of Arms and Ammunition.

Jammu and Kashmir: Terrorists have fired upon a political worker at Chitragam Kalan in Shopian. The injured has been admitted to a hospital. More details awaited

Earlier today, the Jammu and Kashmir Police announced that they have arrested Jaish-e-Mohammed (JeM) terrorist Hilal Naikoo from Anantnag district's Dooru area. The police officials also recovered a huge cache of arms and ammunition from him. An investigation is on to prove his complicity in terror crime.

This comes after the security forces on Sunday killed two terrorists in Shopian district. After getting a tip-off about the presence of terrorists in Hend-Sitapur area, the region was cordoned off and search operation was initiated. After the encounter, bodies of the slain terrorist were recovered.